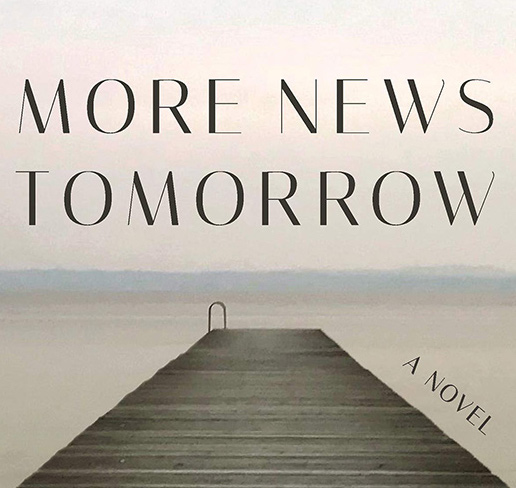 Vineyard summer resident Susan Richards Shreve reaches into the past in her latest novel, “More News Tomorrow,” published this summer. It is a story about a murder that has haunted 70-year-old Georgianna Grove since her father confessed to killing her mother when she was 4 years old.

A letter from Roosevelt McCrary, the only other person still alive who was at the scene, sparks the desire in Georgie, as her family calls her, to go back to the Wisconsin boys’ camp where she was staying with her parents on June 17, 1941. As Georgie’s three children and three grandchildren gather to celebrate her 70th birthday, she announces she wants them all to accompany her back to Camp Minnie HaHa, to meet Roosevelt and uncover the truth about her mother’s death.

A 2008 canoe trip up the Bone River takes them into the wilderness, with stops first at Missing Lake, then Camp Minnie HaHa. It is filled with unexpected and frightening events. Each member of the Grove family comes into focus, and Georgie’s 13-year-old grandson Thomas plays a particularly important role, as does her 4-year-old granddaughter Oona.

In an absorbing and complex narrative, Shreve alternates chapters narrated by Georgie, a cultural anthropologist; Thomas; Georgie’s father William; and Roosevelt, who lives at the camp. Slowly, the pieces begin to fit together. Georgie’s life as a single parent whose husband died in Vietnam has led her to run a sort of boarding house called the Home for the Incurables. It is based on a real former hospital the novelist walked by as a child. A precocious Thomas, who lost his father to cancer, contributes sections of his memoir, providing insight into the reasons for investigating his great-grandmother’s death.

The title of this novel comes from the letter Georgie’s father, who grew up in Lithuania, wrote to her shortly before his death in prison, and his sections of the book expand the world of the Grove family as it existed before his wife Josephine’s murder. Roosevelt, who with his mother is the only African American in the story, enriches the narrative through his perspective on what William was like, how the camp played into people’s lives, and his late mother Clementine’s role in the story.

A photo of Shreve’s maternal grandfather, director of a boy’s summer camp in northern Wisconsin, set the novelist on the path to writing “More News Tomorrow.” Issues of Jewish persecution in Lithuania by the Nazis during World War II, anti-Semitism in the U.S., and the prejudice against African Americans there at the time expand the narrative reach of the novel.

Retiring this year from her position teaching creative writing at George Mason University, Shreve plans to spend more time on the Vineyard, where she summered from her home in Washington, D.C., for 30 years. Although she has never visited Wisconsin, the setting for her novel, her son teaches in the Creative Writing program at the University of Wisconsin in Madison, and she plans to visit him there.

The author of 30 children’s books as well as 15 novels, Shreve says, “I’ve always been interested in children. My natural voice is a children’s voice.” Her 2007 memoir, “Warm Springs: Traces of a Childhood,” recounts her experience as a patient at Franklin D. Roosevelt’s polio clinic. The former president and chair of the PEN/Faulkner Foundation, she is under contract to write a second memoir. Of the “More News Tomorrow” heroine Georgie, she says, “Hers is not my story, but I see something of myself in all of my characters.”

Lighting up the fall