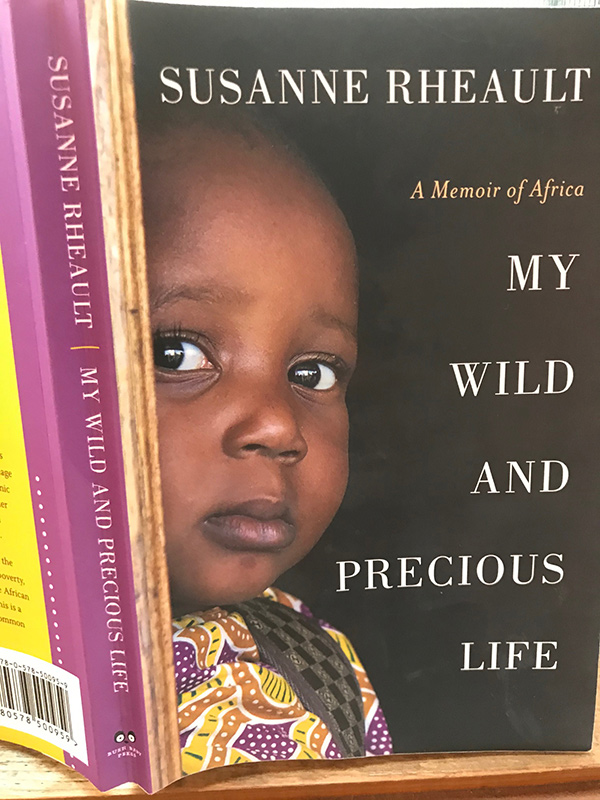 This woman has been around the world, by her own admission, a few too many times, but her exciting and checkered past has yielded a grand project to help kids at risk in rural Tanzania.

First let me say that never before has there been a more solid justification for writing a memoir: Susie Rheault (I’m entitled to call her Susie because I’ve known her since I began coming to the Vineyard in the spring of 1976) is the daughter of the late Nan Rheault.

Many of us have admired Nan Rheault from decades ago, when she built her home on the Lagoon and involved herself in a number of Island campaigns, including the launch of the skating rink across from the high school. Susie’s dad was the handsome and somewhat dashing Robert B. Rheault, head of the — are you ready for this? — Special Forces of the Green Berets during the height of the Vietnam War.

When your father pursues an all-out military career, you and your family need to develop Army brat chops to deal with constant change. In this case, Susie’s family also consists of an adventurous mom and two younger siblings. “We moved 11 times by the time I finished high school — from the flatlands of Kansas to Germany, to South Carolina, to the Right Bank of Paris.”

In her book “My Wild And Precious Life: A Memoir of Africa,” Susie describes a childhood fraught with loneliness mixed with adventure. On Sundays their fierce, outdoorsy dad took them rock climbing, where they learned to rappel off sheer cliffs. (My beloved ex-husband Marty recalls long-ago visits to the Rheault household when Colonel Rheault would burst into a room and announce a group clamber up the nearby water tower.)

The memoirist gives us a refreshing and honest look at the rolling stone existence of an Army daughter, with glimpses of a life rendered in stringent language, such as this vignette from Southern Bavaria:

“We lived in a spacious old SS quarters near areas of bucolic pasture. Dad did skydives for fun on the weekends.” During the same time frame, she describes harrowing attempts to fit into the junior high social scene: “I quickly figure out that being an A student means being an outcast, so my grades slump to Cs and Ds. My friend Darlene teaches me how to shoplift …”

The thrills and insights keep mounting, and, have mercy on our readers’ sensitive souls, even greater and more unusual events are to come in Susie’s grownup years. In revival of her A student tendencies, she obtained a Ph.D. in psychology, and this led to a quick climb — like her Dad’s escalade up the water tower — into consulting jobs with Fortune 500 companies. Her passion to do good in this world also led to a position with the Clinton Foundation and its vital work in Africa. More significant, Susie met and married the dazzlingly kind and talented musician and therapist Peter Gardner, with four kids and a house in Newton. (Yes, we knew Peter, too, and loved him with a wild and precious passion.)

Susie and Peter had a baby, Zack. When Zack was 3, Peter died suddenly in the midst of tending to repairs in the backyard. And yes, this is an egregious trampling of the spoiler alert, but we need to zoom ahead to Susie’s marriage to the couple’s dear friend Gil Williams, around whom the great saga of the orphanage is based (and, yes, I know and love Gil too, mightily).

The memoirist’s accounts of her bounces back and forth from here to Addis Ababa for the Clinton group give us remarkable close-ups into the nomad life, engaged in philanthropic pursuits around Thanksgiving: “This was, after all, my 12th trip to Ethiopia, and I knew the drill. I find myself pining for family and the annual rituals, even for foods I don’t especially like, like cranberry sauce and creamed onions.” Travels take her to small countries at risk, Swaziland and Lesotho, disease, poverty, bombs and explosions, but also breathtaking love and devotion within small communities.

At last Susie lures the tenderhearted Gil over to Tanzania, and virtually before he can unpack his gear, the couple discover a tiny, godforsaken orphanage of nine children who sleep crammed onto two bunk beds, tended by two devoted schoolteachers, William and Sarah Modest. And what do the kids need even more than additional beds? Food. They need food. Tells you everything, doesn’t it?

This rollercoaster adventure began in 2011. “Our original nine kids are now age 11 and up and no longer want to sit in our laps. Happily for us, seven newcomer younger children are quite willing to snuggle.” The primary school hosts 268 children, most of whom are under the age of 7, 68 of them on scholarship.

Susie continues, “Now there are 12 teachers, two school administrators,” and a host of other support positions. From the time Susie and Gil first beheld the three mud-floored huts of the Precious Orphanage to this impressive city on a hill, the couple has triumphed over unbelievable losses, betrayals, noble sacrifice, and rites of passage.

This story will satisfy all one’s yearning to read about exploits that would test the mettle of Indiana Jones, and all of it in service to that great yearning of our age: helping others, especially the neediest among us. Even I, lazy Valley girl that I am, stand ready to follow through with a long-deferred plea to Susie and Gil: Use me.

I’d like to volunteer as a “mama for the house,” which I’m strictly taking to mean holding little kids in my lap, am I right? I suppose I’ll be expected to do some cooking. Maybe cleaning. Changing linen? Well, let us just say I’ll be negotiating for lots and lots of lap time.

Susie’s title derives from the last two lines of Mary Oliver’s epic poem “The Summer Day” — “Tell me, what is it you plan to do/ with your one wild and precious life?”

“My Wild And Precious Life: A Memoir of Africa,” by Suzanne Rheault, is published by Bush Baby Press of Lincoln; available online.