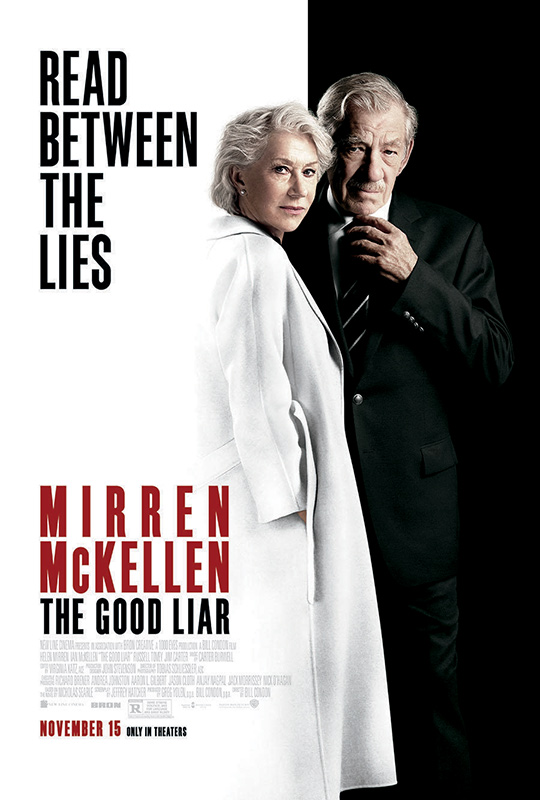 Starring Helen Mirren and Ian McKellen, “The Good Liar” is playing at the M.V. Film Center. This romp says a lot about lying, with the help of two of Britain’s top stars. Bill Condon, who won an Oscar for “Gods and Monsters” (1998), directs. The film was adapted by Jeffrey Hatcher from a novel of the same name by Nicholas Searle.

Mirren plays Betty, a retired widow who lives outside London, and McKellen is Roy, a widower. They meet online at a dating service, and the lying starts. Each has used a fake name, and Roy, who claims to be a nonsmoker, lights up. Telling him she’s a teetotaler, Betty imbibes a glass of wine next to her laptop.

Nevertheless, they fess up, and begin dating. It’s quickly obvious that Roy is a con artist preying on lonely and wealthy widows. The viewers see him hop into a gentleman’s club with pole dancers to negotiate a phony investment deal that seems to include two Russians, until an alarm sends the police, and we see that it’s actually a scam. One of his closest pals is Vincent, played by Jim Carter, Mr. Carson of “Downton Abbey” fame.

Betty falls right into Roy’s trap, inviting him to stay with her when he starts to hobble up to his eighth-floor apartment with a bum knee. The knee, of course, is fine when he’s not with her. Betty has a grandson, Steven (Russell Tovey of HBO’s “Years and Years” and “Looking”), who often stays with his grandmother. A grad student specializing in WWII history, Steven is immediately suspicious of Roy, unlike his apparently sweet, trusting grandmother. The viewer, of course, sides with Steven, and the tension ramps up when the two put their investments into a joint account.

Nevertheless, the companionship — Betty insists on keeping it platonic — continues, and they plan a European vacation. The first stop is Berlin, and Steven is in tow, since he’s an expert in German history. Things go in an unexpected direction, but viewers need to watch the movie to find out how.

Twice nominated for Oscars, McKellen is considered one of the greatest stage and screen actors internationally as well as in Britain. He’s also an alumnus of other Condon films, including “Mr. Holmes” and “Gods and Monsters.” The viewer will recognize him as Gandolf in “The Hobbit” and “The Lord of the Rings” series. Now in his 80s, he shows his age, unlike Mirren who’s a septuagenarian, but in “The Good Liar,” he’s very considerate and caring with Betty. The viewer begins to wonder if he really has fallen for her.
Mirren, a Dame Commander of the Order of the British Empire, has won a Best Actress Oscar for her performance in “The Queen,” and nominations for “The Last Station,” “Gosford Park,” and “The Madness of King George.” It’s always worth watching her at work, starting with Jane Tennison in TV’s “Prime Suspect: The Final Act” (2006).

“The Good Liar” is not one of the best films either McKellen or Mirren have appeared in. The plot is full of holes, but the subject of lying is interesting, and it’s great fun to watch these two excellent actors perform.

Information and tickets for “The Good Liar” and other Film Center and Capawock films are available at mvfilmsociety.com. For information on films at Edgartown’s Entertainment Cinemas, go to entertainmentcinemas.com/locations/Edgartown,