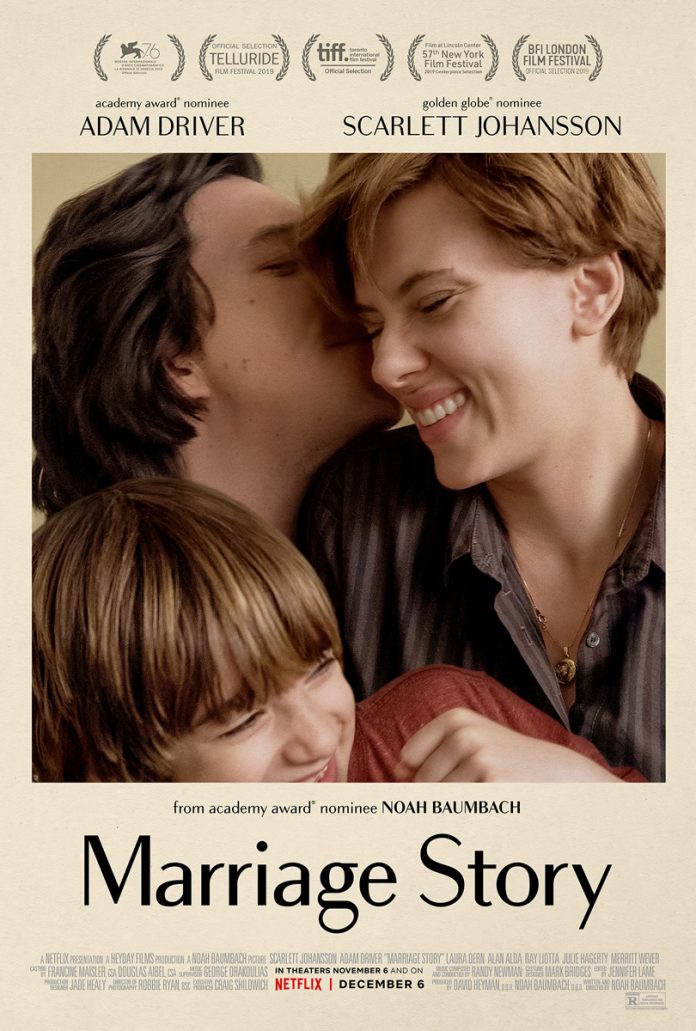 “Marriage Story” director Noah Baumbach’s latest star-studded film about a couple’s domestic issues is playing at the Martha’s Vineyard Film Center. The couple, Nicole and Charlie, are portrayed by Scarlett Johansson (also in “JoJo Rabbit,” now in theaters), and Adam Driver (Oscar nominee for Best Supporting Role in “BlacKkKlansman,” 2018). Baumbach earned a Best Screenwriting Oscar nomination in 2015 for “The Squid and the Whale.” Singer-songwriter Randy Newman, with 20 Original Score and Song Oscar nominations, provides the music.

Rather than a tale about marriage, “Marriage Story” might be better titled “Divorce Story.” As the movie begins, Nicole and Charlie are already seeing a mediator, who asks them comically to list what they like about each other.

Nicole decides she needs to branch out, and moves from New York City to Hollywood for a role in a TV series. She had previously starred in performances that Charlie directed at a New York theater. Nicole and Charlie are goodhearted people, and they want an amicable divorce. Together, they want to raise their son Henry, played by Azhy Robertson, and agree not to use lawyers, to make the process as simple as possible.

Alas, in comes Nora Fanshaw, played by Laura Dern (two-time Oscar nominee), a lawyer who takes on Nicole’s case. Charlie is stunned, and decides he needs a lawyer too. Star actor Ray Liotta plays Jay, the aggressive lawyer Charlie enlists. The two lawyers set up battlegrounds, and the bills for the couple begin to add up.

Put off by Jay, Charlie chooses gentler advocate Bert Spitz, played by Alan Alda (another Oscar nominee). The back and forth between the lawyers and their clients commands the plot. It shows how contentious a divorce using legal counselors can become, even between parties trying to remain friends. A key issue is how to make the process easier for 8-year-old Henry, and ensure that both parents spend time with their son. Henry bounces back and forth between parents.
The push-pull between Nicole in California and Charlie in New York tightens tensions, and the pair begin to attack each other in ways they never thought possible. The impact of the impending divorce on other family members becomes evident. Nicole’s mother Sandra insists on maintaining her warm relationship with Charlie, and Nicole’s sister Cassie panics when asked to serve the legal divorce papers.
“The Squid and the Whale” is another Baumbach divorce film, told from the perspective of the children. A number of critics suggest the director’s films are based on his own life, most recently on his divorce from Jennifer Jason Leigh, although Baumbach insists that is not the case.

Critics have praised “Marriage Story,” suggesting it, as well as Johanssen, Driver, and Dern, will receive Oscar nominations. “Marriage Story” is a movie that ends up showing a sweeter side to divorce disputes.

Information and tickets for this and other films playing at the Film Center, the Capawock, and Entertainment Cinemas are available at mvfilmsociety.com and entertainmentcinemas/location/Edgartown.