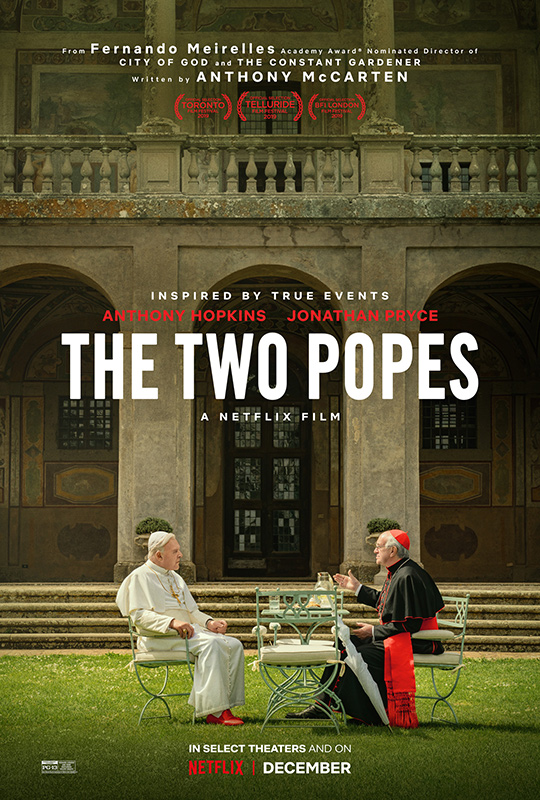 “The Two Popes” is a compelling look at Vatican politics and the men in the middle of it. Anthony Hopkins plays Pope Benedict XVI, and Jonathan Pryce, Cardinal Julio Bergoglio, the future Pope Francis. These two veteran actors perform brilliantly, as does director Fernando Meirelles from “City of God” and “The Constant Gardener” fame. Screenplay writer Anthony McCarten (“The Darkest Hour” and “Bohemian Rhapsody”) based the script on his 2017 play, “The Pope,” and his contribution is equally important.

“Two Popes” begins with the death of Pope John Paul II and subsequent election of a successor. The contest is between German Cardinal Joseph Ratzinger and Cardinal Jorge Bergoglio of Argentina. The winning 77 votes go to Ratzinger, who becomes Pope Benedict XVI in 2005.

The voting scenes are dramatic and beautifully photographed, with the cardinals convened in the Sistine Chapel and dressed in brilliant red robes. Black smoke from the voting enclave means no pope has been elected. White smoke announces a pope has been chosen. Crowds wait outside the chapel and cheer once the new pope is elected.

The scene shifts to 2012 and Bergoglio in Bueno Aires. He wants to retire, but Pope Benedict XVI summons him to Castel Gandolfo, his summer residence. Details add up to illustrate the difference in personality and leadership style between the two men. For example, Pope Benedict eats by himself, so a visiting Bergoglio must also.

Cardinal Bergoglio repeatedly asks the 86-year-old pope to look at his papers of retirement. “No, no, no,” Pope Benedict insists repeatedly. A series of scandals — financial and pederasty in particular — call the pope back to Rome with Bergoglio in tow, carrying oregano given to him by the summer gardener. The conversations of the Pope and Bergoglio take over the narrative. Not all of the events are factual. Benedict XVI did not actually meet with Bergoglio to discuss Bergoglio’s retirement, but it makes for dramatic scenes.

“I don’t agree with anything you say,” insists Benedict XVI, after Bergoglio argues, “Sin is a wound. Forgiveness is not enough.” Flashbacks into Bergoglio’s past as a young man are part of the film. He worked in a lab as a scientist, and then had a romance with Esther, but his spiritual devotion led him to become a priest.

Many touches characterize the two men. Benedict XVI is called a Nazi by some of his congregants, plays the piano, and has made an album of Vatican music. He loves Orange Fanta, drinking several cans a day. “Perhaps I need a spiritual hearing aid,” he says at one point. Bergoglio dances the tango once a week and loves to watch soccer. He chats with the guard posted outside his door, getting Wi-Fi help from him.

The story told in flashbacks of Bergoglio’s actions during Argentina’s brutal Dirty War is accurate. Bergoglio was the Jesuit head in Argentina, and many criticized him for his attempts to make peace with the dictatorship at the time. Some 30,000 people were killed, including many priests.

Another dramatic fabrication is the pope’s consultation with Cardinal Bergoglio over his decision to resign. It did lead to Bergoglio’s ordination in 2013. He became the first pope from the Western Hemisphere, and the first Jesuit pope.

Hopkins’ portrayal of Pope Benedict XVI illustrates his humanity and appeal despite his conservative approach to leadership. Pryce’s characterization of Bergoglio might show him as more progressive and engaging. But the two are well matched. “The Two Popes” will keep viewers engaged and satisfied.

Information and tickets for “The Two Popes” and other Film Center movies are available at mvfilmsociety.com. Those at Entertainment Cinemas can be viewed at entertainmentcinemas.com/locations/Edgartown. The Capawock is closed for the season.