The Vineyarder girls basketball team bounced back from a tough home loss to Cardinal Spellman on Wednesday afternoon by gutting out a 35-33 come-from-behind win over the Monomoy Sharks, Thursday in Harwich.

Kylie Estrella made two free throws with nine seconds remaining to clinch the win, and finished as the leading scorer, with 13 points.

“It was well-deserved; we played hard last night,” Vineyard Coach Sterling Bishop said in a phone call to The Times on Friday. “We were down for the majority of the game, but at some point, I don’t know what happened … divine intervention … the girls decided that they were tired of losing and wanted to fight back, and it translated into a victory.”

The Vineyarders gradually gathered momentum in the third quarter, and tied the game on a Sasha Lakis bucket late in the period to tie the score at 23-23. Estrella popped a jumper with 5:35 left in regulation to put the Vineyarders in front for the first time, and sank a follow-up trey for good measure. “Kylie Estrella took over the game, being aggressive, attacking the defense, and outworking everyone on the floor,” Coach Bishop said.

With a second win under their belts, the Vineyarders (2-5) head to Cape Cod Academy on Saturday afternoon and host Sandwich in a Cape and Island League Atlantic Division contest on Tuesday (JVs, 3 pm; varsity, 4:30), aiming for continued success.

“They finally had a moment where they could believe in themselves, and saw that with hard work, anything is possible,” Coach Bishop said. 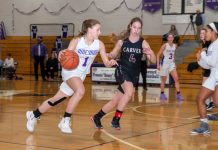 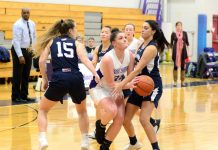