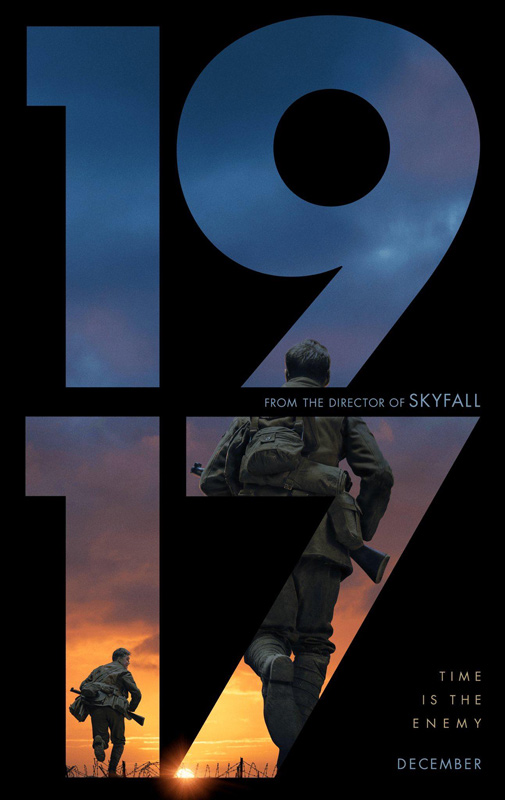 Arriving at the M.V. Film Center this weekend is “1917,” a WWI cinematic extravaganza by director Sam Mendes. Following the mission of two young British soldiers, it uses the stunning technique of the single take to tell the story. Some as long as nine minutes, a series of single takes are actually patched together to immerse the viewer in the cinematic journey.

Mendes won an Oscar for his 1999 film “American Beauty,” and has a hatful of theatrical credits, including, most recently, “The Lehman Trilogy.” The director based the story of “1917” on stories his grandfather, Alfred H. Mendes, told him about the war. The film has already won Golden Globe awards for Best Film and Best Director.

After the assassination of Austrian Archduke Franz Ferdinand, WWI began in 1914, and continued to 1918. The U.S. entered on April 6, 1917, the same day “1917” is set. Called “The War to End All Wars,” the war is considered by many historians to be instigated by nationalist sentiments.

The camera stays glued to runners Tom Blake (Dean-Charles Chapman, “Game of Thrones”) and Will Schofield (George MacKay, “Captain Fantastic”) from the beginning of their race against time to stop a misguided battle. Blake is picked because his brother is part of the 160,000 soldiers readying for an attack on German forces, and he chooses a reluctant Schofield because of their friendship.

The two runners are assigned by General Erinmore (Colin Firth) to cross no man’s land in northern France and deliver a message to Colonel MacKenzie. The message is to halt the planned attack on German forces. It’s suspected of being a trap set by the Germans, who have retreated to the Hindenburg Line, where they have taken up positions in powerful trenches and fortifications.

The race is horrific. The two pass dozens of dead soldiers and horses already deteriorating, and shown being eaten by rats. Barbed wire must be crossed, and Schofield wounds his hand on one of the fences. While exploring an underground German mine, they are nearly killed by an explosion caused by a tripwire, and Blake saves Schofield’s life. At one point an enemy plane crashes into the barn where the two have arrived, and they rescue the German pilot, with tragic results.

Chased by German soldiers, Schofield lands in a roiling river, where he ends up struggling through corpses of soldiers to get out of the water. Another time he discovers a French woman hiding with a baby. German soldiers fire at Schofield numerous times while he is en route to the British forces.

Despite the awards given to “1917,” prominent critics from the New York Times, the New Yorker and Salon have condemned the film for its lack of context and simplistic setup of good forces versus the evil Germans. They have criticized Mendes’s single-take technique as an inappropriate form of cinematic showmanship, and for the lack of character development. Viewers will have to decide for themselves if these flaws are enough to outweigh the film’s gripping, grim tale.

Information and tickets for “1917” and other Film Center offerings are available at mvfilmsociety.com. Find films playing at Edgartown’s Entertainment Cinemas at entertainmentcinemas.com/locations/edgartown/.