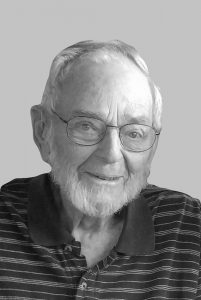 Ned was born in 1924 in New York City, the youngest of three children of his father Joseph, a math teacher (for over 50 years!) at George Washington High School, and his mother Judith, a homemaker. His connection to Martha’s Vineyard began in early childhood. The family first visited the Island in 1925, and subsequently returned every summer. A favorite family story illustrates Ned’s immediate attachment to the Island: Ned was about 6 years old, and upon hearing that it was time to go to the ferry to leave Martha’s Vineyard at the end of the summer, he promptly climbed a tree and refused to come down. (The family missed the departing ferry.)

Ned graduated from George Washington High School in 1941, and entered Antioch College, in Yellow Springs, Ohio. His college career was interrupted by service in the Navy, where he was a radarman on the destroyer USS Benner in the Pacific, and was part of the occupation force after the war. After his release from service in 1946, he returned to Antioch College, majoring in math. There he had the good fortune to meet Ellen Shufro. Ned and Ellen married upon their graduation from Antioch in 1948. They spent two years in Dayton, Ohio, where Ned worked for Rike’s Department Store, and then moved to Boston, where Ned earned an M.B.A. from the Harvard Business School in 1952.

Ned and Ellen made their home in Alexandria, Va. Ned became an executive with Woodward & Lothrop, a local department store chain. They had two children, Jonathan in 1954, and Jennifer in 1959. Ned and Ellen were both active in the children’s schools, and in the mid-1960s, Ned was appointed to the Fairfax County, Va., school board. The family came to the Vineyard nearly every summer, usually staying in the Lagoon Heights area near Ned’s parents, where they eventually bought a house.

Ned left Woodward & Lothrop in 1970, and went to work for Federated Department Stores in Cincinnati. The family lived in Yellow Springs, Ohio. Then in 1973, Ned made a major career change, leaving the world of retailing to bring his business skills — particularly in strategic planning and facilities management — to the Fairfax County Public Schools as an assistant superintendent for planning. The family returned to Alexandria.

Ned and Ellen retired and fulfilled their lifelong dream when they moved full-time to Martha’s Vineyard in 1989. Harold Chapdelaine built their house off Winyah Lane, on a street that eventually became known as Chapde Lane. They were active in the community. Ellen became a member of the board of trustees of the Vineyard Haven Public Library. In 2004, Ned was appointed (and later elected) to the Martha’s Vineyard Commission, to which he brought his training and experience as a planner, and where he advocated for thoughtful, intelligent development that preserved the Island’s special character. Ned was frequently sought out for his perspective on Island affairs, and was a mentor to younger friends interested in involvement in Island politics. He also became a much-beloved crossing guard for students attending Tisbury School. And after a lifetime rooting for New York and Washington, D.C., sports teams, he transferred his allegiance, and became a devoted fan of the Red Sox, Celtics, and Patriots.

After Ellen died in September 2015, Ned lived for a time at Havenside in Vineyard Haven, and then moved to Brewer House. While he struggled with various health issues, he remained both physically and mentally active, walking to town as frequently as he could, participating in discussion groups, and joining friends for movies and dinners. To the end, he could always be counted on to express strong opinions about Island affairs.

Ned is survived by his daughter Jennifer, her husband John Skrovan, and their children Sarah and Matthew; his son Jonathan, Jon’s wife Linda Liefland, and their children Eliza and Rebecca; and many nieces, nephews, great-nieces and great-nephews. He had a particularly close relationship with his nephew Jeffrey Orleans. On the Island, Gladys Segal, Lesley Segal, and Sandie Corr-Dolby were special friends, as was Bonne Knipfer off-Island. Jon and Jen express particular appreciation to the owners and staff at the Henrietta Brewer House.

A memorial service for Ned will take place at the Martha’s Vineyard Hebrew Center on Sunday, March 22, 2020, at noon. Donations may be made in his memory to the American Civil Liberties Union, or to the Island-focused charity of the donor’s choice.