The Vineyarder boys earned a 71-55 win over Sacred Heart of Kingston, while the girls lost, 79-54, in the final home swim meet of the season, Tuesday afternoon at the YMCA of Martha’s Vineyard.

It was senior day for the Vineyarders, and graduating seniors Indigo Giambattista, Kathryn Cuthbert, and co-captain Abigail Hammarlund were recognized prior to the start of the meet.

Friday afternoon at the Y, the Vineyarders lost two close meets to nonconference Durfee of Fall River. The girls lost 87-77 to the Hilltoppers, while the boys dropped an 82-67 decision.

Next up for the Vineyarders is the Cape and Islands League championship meet in Sandwich on Saturday. 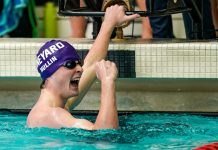 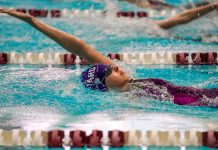