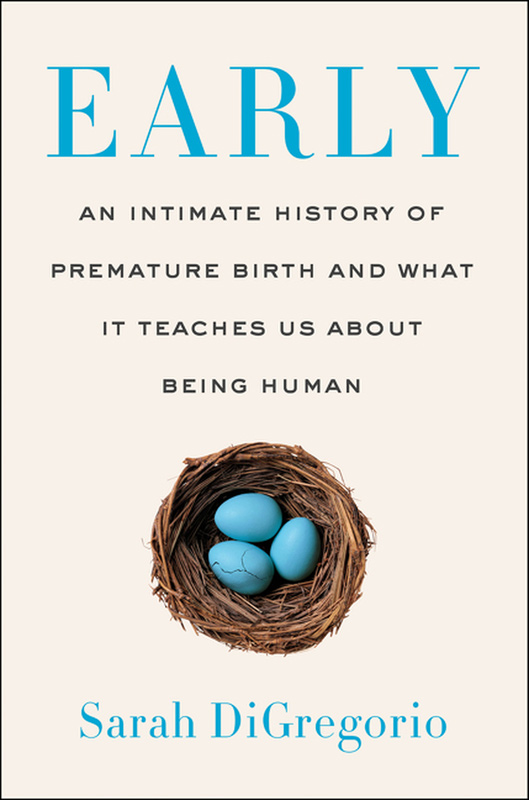 Sarah DiGregorio tells many a gripping tale in her book “Early: An intimate History of Premature Birth and What It Teaches Us About Being Human.” As a freelance journalist, she researched the science of neonatology through her own experience, along with those of the parents and NICU clinicians it has touched.

DiGregorio starts right off the bat with the complication that led to the birth of her own daughter, Mira, at just 28 weeks old and weighing a scant 1 pound, 13 ounces: “At some point — no one knew exactly when — my placenta, which I imagined as a beat-up old car, chugging along, belching smoke, would simply stop working, and she would suffocate and die. The high-wire act was to keep Mira inside until the last possible moment and then get her out.”

We then follow DiGregorio through her whirlwind emergency C-section at NYU Langone Medical Center in New York City and the moments afterward. After her birth, Mira apparently was limp, blue, and required a breathing tube. And once resuscitated, she still had a long way to go. DiGregorio continues with the gripping tale of Mira’s 59-day stay in the NICU: “You couldn’t even see Mira’s face, covered as it was with a little mask to protect her undeveloped eyes from the lights and the tape holding the ventilator in place. Born emaciated … her skin wrinkled and hung off her toothpick bones … I was horrified to see she had no bum, none at all. Just legs ending in a bony area with a rectum. She seemed in obvious discomfort, painfully exposed. I wanted to unzip my body and stuff her back in.”

Not uncommon for babies in the NICU, Mira’s heart rate would plunge toward zero several times a day, setting off a shrill beeping sound. From her long days at the NICU, DiGregorio learns that even without anything wrong with the heart, it is completely routine for premature babies to forget to breathe. We hear of many more similar hair-raising moments. These tiny ones face the dangers of a brain bleed, infections, and necrotizing enterocolitis (in which a portion of the intestines die), among others.

She learns through doctors and the parents of premature babies that even after being discharged, babies might go home still on oxygen, sometimes needing it for a year. Also, parents often have to change the feeding tubes, threading it up their baby’s nose and down the esophagus.

But DiGregorio simultaneously also lays out some of the thorny socio-moral issues in her book. Sometimes parents have to make a terrible choice. She explains that most deaths relate to the fact that the babies’ little bodies aren’t ready to be here. In a research article in JAMA Network Open, a medical journal published by the American Medical Association, she learns that 60 percent of 22-week babies do not get active treatment, without which they inevitably die. She writes that when the chances of survival are extraordinarily slim, it is sometimes the kindest course — intensive care can be painful and burdensome for the infant, and can only be justified if there is a reasonable likelihood that they can benefit from it. She goes on to cite that at 22 weeks, according to some data, 75 percent of survivors have either moderate or major disability, including cerebral palsy, blindness, or deafness.
Likewise, their potential viability as young as 22 weeks old has an additional implication: It has changed the ways we understand what it means to be alive, what it means to be human, and what constitutes a life worth living. At least for the moment, it messily defines abortion laws in the United States, since “viability” is determined by neonatology’s success … Premature birth — and which groups suffer from it most — reflects back all the deep racial and economic injustices that plague the U.S.

One of the major factors leading to premature births is stress, including mental and physical illnesses in the mother or a close family member; income, food and housing insecurity; unsafe working conditions; the threat of gun or police violence; and not surprisingly, lack of access to health- and childcare. Sitting in on a series of sessions at Bronx-Lebanon Hospital, DiGregorio shares how group prenatal care is an astonishingly simple, cost-effective, and low-tech approach to combating stress. The women meet regularly as a group with a certified nurse midwife, and receive the same standard checkups everyone else does — fetal heart monitoring, belly measurement, weight and blood pressure checks, and so on. Looking at research by the Centering Healthcare Institute, as well as Yale and Vanderbilt Universities, DiGregorio says that it seems that the hour the women spend together in a small circle asking questions, sharing experiences and opinions, and learning information might be responsible for cutting their risk of preterm birth rates in half. She conjectures that the “secret sauce” for this success might come from women no longer feeling like passive patients but rather active members of a prenatal group, in which they feel more assured of being heard and not dismissed.

DiGregorio includes other positive stories, statistics, and innovations in incubation. One such is the Giraffe Omnibed Carestation — a hybrid incubator/radiant warmer that has better outcomes than having to move a baby from radiant warmer to incubator and back again. The 328-pound machine, now used in 80 percent of American NICUs, apparently looks something like a small spaceship submarine.

DiGregorio covers so many other richly interesting issues, each of which she tells through personal stories of the parents and doctors whose lives are wrapped up in them. The centrality of the very human aspect of her book is nowhere better summed up than in her ending: “Gestation is a marvel, no matter how it is accomplished. But gestation isn’t the real magic. Love is the magic. Love is the only magic.”

Sarah DiGregorio will speak at the Vineyard Haven library on Sunday, Feb.16, at 2 pm, on her book, “Early: An Intimate History of Premature Birth and What It Teaches Us About Being Human,” HarperCollins.