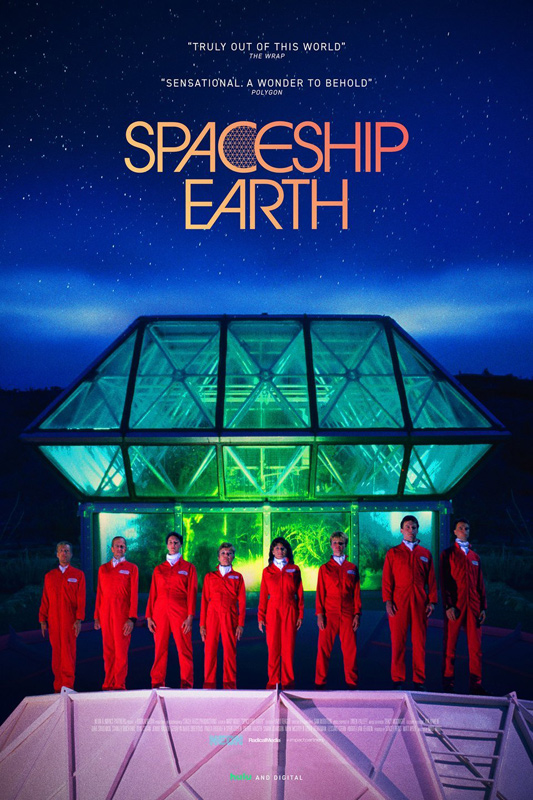 The now-virtual Martha’s Vineyard Film Festival opens with the Friday, May 8, online premiere of “Spaceship Earth.” The documentary is about as ironic as it gets. We’re all still under a stay-at-home order, and this film is about the time a team of eight scientists and researchers were locked for two years inside a biosphere (1991 to 1993), complete with man-made biomes that included a rainforest, ocean, coral reef, and all manner of agriculture. The experiment is supposed to reveal how lifeforms can coexist and survive in this premade atmosphere. The structure itself, Biosphere 2, is mostly made of glass and metal, and sits in the desert in Oracle, Ariz. (It’s called Biosphere 2 because Biosphere 1 would be, naturally, the Earth.)

The documentary introduces us to a group of ecologists who were passionate about climate change long before it became omnipresent. Footage takes the viewer back to the group’s beginnings, in San Francisco in the 1960s, which might lead you to believe this bunch of dancing, flowy young folk are nothing other than typical young adults looking for whatever it was everyone was looking for in the 1960s. They congregate around a leader, John Allen, a bit of a wanderer with an interest in science and artistic endeavors. Allen is a little older, a little wiser maybe than the rest.

First they think theater will be the best artform to get their ideas across, founding the Theater of All Possibilities. They tire of the San Francisco scene though, and move on to New Mexico, where they set up the Synergia Ranch, which still exists. But the ranch isn’t one of those communes that are so easy to imagine. These members are deeply creative and industrious. With Allen still leading them, the possibilities were endless. Another project was building their own sailing vessel, the Heraclitus, from scratch, and sailing it around the world. In efforts to continually seek bigger and better projects, they get an ecology-minded Texas billionaire Edward Bass on board, and he backs their most grandiose idea yet, Biosphere 2.

Viewers of a certain age may remember all the hoopla in 1991 surrounding what many in the scientific community called a failed experiment. But this documentary, with its interviews of original members who actually lived inside the Biosphere 2 for two years, makes the viewer question whether it was an experiment gone wrong or a testament to the human mind and spirit.

After watching them work like mad to get the biomes up and running — they gather specimens from all over the world to include in Biosphere 2 — you are rooting for them. Eight men and women, two of them couples, get locked inside but before long things start to turn weird. There’s the media frenzy surrounding the experiment, and you see crowds knocking on the glass and waving to the members inside as if they’re animals in a zoo.

Along the way, some of the plants don’t survive, some of the animals don’t, and others, like cockroaches, thrive in the atmosphere. The humans face their challenges as well. They run out of decent food, there’s a spike of CO2, and all of them are much thinner by the time the door opens two years later.

Like many good ideas that don’t turn out exactly as planned, Biosphere 2 ends with an ugly twist. Bass, the billionaire backer, loses faith in the project’s leaders and decides to hire a young . . . wait for it . . . Steve Bannon to revamp the program. This, of course, doesn’t sit well with all the scientists involved with Biosphere 2 and John Allen’s other endeavors. In the end we learn that Biosphere 2 is now under the purview of the University of Arizona, supported by Bass, and Allen and some of his pals from B2 are still living at Synergia Ranch.

Right now, as we’re all taking the idea of sustainability very seriously, “Spaceship Earth” is the perfect way to open the MVFF. Visit tmvff.org/spaceshipearth to find out how to watch.

‘Made in Italy:’ Father, son, and their house

‘The Glorias’ is glorious

Hannah Moore has her first exhibit at the Field Gallery