Imagine hoisting yourself up onto the back of a large truck, carrying everything from corn and barley to dead animals, pulling your duffel bag and camera bag up with you as you climb on top of the sacks of grain. Men, women, and children are added to the cargo, and more dry goods. To top it off, you’re in a little village in Peru, 9,000 feet up, surrounded by mountains. And you have to make your way through switchbacks in order to get where you’re going; sheer drop-offs are just beyond the truck’s tires. None of the 35 other passengers riding with you on the back of this truck speaks English, and you aren’t familiar with their language either. Finally, after 10 hours of jostling in the back of the truck with no food, water, or bathroom breaks, you arrive at your destination. It’s an onerous trip by any standards, but you’re also nearly 60 years old. This is only part of one of five trips described in Shirley Mayhew’s latest book, “Paucartambo: A Midlife Adventure from Martha’s Vineyard to Peru.” The book is a compilation from her journals covering five trips to Peru between 1983 and 1991.

She is 94 now, and has lived on the Island since 1947, when she settled here with her husband John. They had three children, tried oyster farming, but eventually they both turned to teaching — high school math for John, and junior high English for Shirley. She says in the book that she had spent her life in two places: Westchester County, N.Y., and Martha’s Vineyard. “After more than 20 years of marriage, with three children aged 12 to 18,” she writes in the book, “I got an urge to travel.” She spent the summer school vacations visiting far-off places, sometimes with friends or family, and sometimes alone.

After traveling to 11 countries, Shirley decided she wanted to immerse herself into the culture when she took her next trip, not just arrive there as a tourist being driven around on buses to look at sites chosen by a travel agency. “So, at the age of 58,” she writes, “I settled into a remote village high in the Andean mountains of Peru.”

The people who lived there spoke no English; some didn’t speak Spanish. They were Quechuan Indians, still dressed like their ancient Inca ancestors.

“I got tired of being a tourist, and wanted to see how ordinary people lived around the world,” Shirley wrote in an email to The Times; “that required I find a non-touristy place to settle into — an American expatriate with a Peruvian wife in Cuzco helped me choose Paucartambo.”

It couldn’t have been easy to convince your husband and children that you wanted, needed, to make these journeys back when Shirley did her traveling, but she was determined. Readers can almost feel her independence, her sense of self growing as she writes about the people she meets along the way. Shirley reflects on her first plane ride, from Boston to Denver, which was also the first time she took a tranquilizer, “washed down with a martini on the plane.” By the time she went to Peru, she was a seasoned traveler.

“I thought about dying in a plane crash every time I flew, but I didn’t dwell on it,” she writes. “Since that early flight in 1965, my children had grown up, and I had lived 58 good years, and ‘que sera, sera.’ There is great freedom in being unafraid.”

While she’s in Paucartambo, Shirley gets to know the people in the village. She serves as godmother to a little girl, Carmen, and gets caught up in the dancing during the annual Fiesta de la Carmen, in honor of the village’s patron saint, Mamacha Carmen. The town’s inhabitants recognize her after her first journey there, and they invite Shirley into their homes and into their lives. A traveling companion during one of the trips and a fellow teacher from the Island, Verna Lacey, makes the journey to Paucartambo with Shirley, and the two become patrons of one of the dance groups, who practice all year before coming to the festival. They also come back to the Vineyard and hold fundraisers, Shirley at the Edgartown School and Verna at the high school, and raise $2,000 to take back to Peru, where it would benefit all three of the schools in Paucartambo. In a place where dinner at a restaurant cost 57 cents, that money went a long way.

Staying at such a high altitude in a place where the bathrooms were few and where guinea pigs were served roasted for guests, Shirley seems to take it all mostly in stride as she revels in learning new things and building relationships. “I put the Paucartambo book together more recently by choosing part of the five journals to combine in one story — no one in my family understood why I kept going back to a remote village in the Andes that had no communication, limited electricity, not much sanitation, no common language, etc. I thought this book would help them understand,” Shirley wrote in an email.

Asked if she writes still, Shirley said she composes short pieces that often don’t get finished.

“I started one on how we spent Mother’s Day (with three mothers in our house), but bogged down, and now that holiday is gone by — we only have one father in our house, so maybe I can compare the two special days before that is upon us in June.”

She may get bogged down occasionally, but this wife, mother, grandmother, and great-grandmother has a lot of stories to tell.

“Paucartambo: A Midlife Adventure from Martha’s Vineyard to Peru,” by Shirley Mayhew, published by Music Street Press. The book will be available at Island bookstores when they reopen, and online. 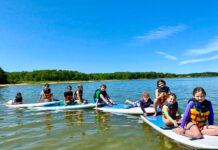