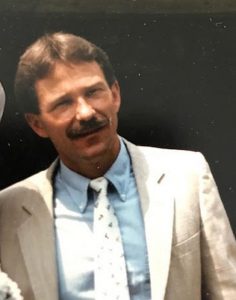 Bob was born Dec. 22, 1950, to Jane (Whitney) and Justin Schumann. He was the oldest of three siblings, and grew up with his brother Tom and sister Annemarie in Wantagh, Long Island, N.Y. During their childhood, summer days were spent at Jones Beach, stopping for ice cream on the way home.Whenever his Uncle Jim came over, all the kids in the neighborhood would gather around for ghost stories, told with precise details and sound effects that both delighted and scared everyone, no matter what their age! Every summer at Trout Lake in the Adirondack Mountains, they played bingo, square-danced, played Ping-Pong, and, of course, spent endless hours swimming, fishing, and boating.

This quality family time ended when his father died in October 1967, when Bob was 16, and his mother passed away two and a half years later, in March 1970. After attending Chaminade High School on Long Island, he was accepted by an Ivy League college, but chose to go to a local university to be closer to family. After two years, Bob decided to pursue a different path, becoming a skilled carpenter. He built houses in Vermont and Martha’s Vineyard, as well as becoming a fine finish carpenter and cabinetmaker.

He spent time living in both New Orleans, La., and Townshend, Vt. Following the devastating death of his brother Tom in 1987, he joined his sister Annemarie, and moved to Martha’s Vineyard. It was there that Bob found his true home, and his lifestyle reflected the way of the Island: the relaxed pace of life, the fertile soil, the calming effect of the ocean around. Among his favorite places were the Cliffs and beaches of Aquinnah and Menemsha.

His daughter Bethany, born June 26, 1985, was the light of his life, and parenting became his focus. He was so proud of her, celebrating all of her accomplishments and dedicating as much time to be with her as possible, building memories and introducing her to new places and experiences.

Bob was charismatic, brilliant, cultured, and charming. Annemarie used to refer to him as “Mr. Smooth.” People from all walks of life felt listened to and cared for; no matter where he went, he made deep, instant connections with people that often lasted for years, or even decades.

Known for being talented in the kitchen, Bob took pleasure in making delicious meals for family and friends, using the freshest ingredients possible, including the watercress that grew in the stream behind his home for many years.

Bob’s home was always full of the sound of rock ’n’ roll, reggae, jazz, blues, and classical music. His hundreds of records typically sat on the shelves that he’d built. He was also a lover of live music, from the local drum circle on the beach to stadium shows like the Grateful Dead, Bonnie Raitt, Van Morrison, Simon & Garfunkel, and Bruce Springsteen, just to name a few. Bob was always turning people on to new singers and songwriters, and that’s one of Bethany and Annemarie’s fondest memories of him. Bethany and Bob went to see all types of concerts together, their favorite experience being Springsteen at the Meadowlands in New Jersey. Some of Bethany’s favorite childhood memories were made up of the hours-long car rides they used to spend listening to their favorite music over and over again.

Bob was predeceased by his parents, Jane and Justin Schumann; grandmother Rosemary Schaffner; aunt and uncle Anne and Jim Jones; and brother Tom Schumann. He leaves his daughter, Bethany Socha of Boston; sister and brother-in-law Annemarie and Terry Donahue, nephew Justin and niece Mariah of Edgartown; aunt and uncle Maureen and John Schaffner of South Windsor, Conn.; cousins Erin Tynan, Colleen Barisano, Kate Schaffner, and Patrick Schaffner, and their families. He also leaves many good friends, who will miss and remember him always.

A celebration of Robert’s life is being planned for late summer or early fall. Please send your contact information to robertjustinmemorial@gmail.com if you would like to receive updated information.