Dr. Susan Whiting Shanok, N.C. Psy. A. of New York City and Chilmark, passed away peacefully in her sleep early in the morning on Tuesday, May 26, 2020. 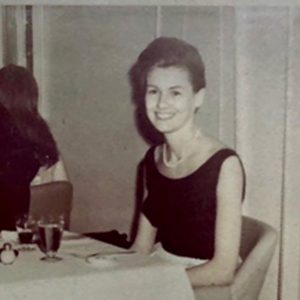 Susan was the wife of William Shanok for 56 years, mother to Tory Dolan, Sarah Kitchens, and Tovah Shanok, predeceased by her beloved son Gabriel Shanok, and grandmother to five grandchildren, Emma, Katie, Will III, Gabe, and Hazel.

Susan moved to New York from Peabody after attending college in Boston, then received her bachelor’s degree and doctorate from NYU. In 1974, Susan was a contributor to Woman’s World magazine. She was a practicing psychoanalyst and international mediator, and an active member on the board of the National Association for the Advancement of Psychoanalysis (NAAP), where she served as president from 1992 to ’94. Susan worked as a divorce mediator, notably with LGBTQ couples before their unions were recognized by New York State. She was well-respected by her patients and colleagues, who praised her insight and dedication.

Susan would generously give you the earrings she was wearing if you admired them, was always willing to lend her expertise to help a stranger or friend to solve a problem, and found the bright side to almost any situation. While working as the original “galley girl” in Menemsha when the restaurant still had a counter inside, she spilled an entire bowl of hot soup on the actor James Cagney, known casually to the locals as Jimmy, and quickly responded with, “Don’t worry Mr. Cagney, I’ll get you another bowl of soup.” She and a friend got lost one night driving around Berlin in 1989, and figured they could find their way by following a growing crowd of people, carrying ladders and hammers, all headed in one direction, soon after stumbling upon the fall of the Wall, and celebrating with the locals as East and West Germany were reunited. Before the invention of the Internet, Susan struck up conversations with fellow passengers on planes arranging house exchanges with her home on Middle Road, allowing her and her family to explore foreign countries and locales, forming lifelong friendships with strangers. In a ritual begun in the 1950s to extend post-shift dump trips from the Galley, Susan enjoyed taking a final spin around the dock, a pastime she continued for the rest of her life. She will be dearly missed by family and friends.

In lieu of flowers, donations can be made to the Visiting Nurse Association of Cape Cod-Martha’s Vineyard.