My name is Vitoria Krasa, I’m from Curitiba, state of Paraná. My city is known to be founded by European immigrants. I’m the grandchild of a Holocaust survivour. My grandfather had to leave his family in the Czech Republic when he was 13 years old so that he could escape having the same fate as his father in Auschwitz. After years escaping the war, he lived in Chicago for a while; years later he went to Brazil, where he started his life with the clothes he was wearing; he knew how to speak English, French, German, and Hebrew, but he did not know how to speak Portuguese. He got past those obstacles. Got married and had two children … one of them my father, my inspiration.

My dad had majored in economy, he was self-taught, watched movies and documentaries with me, always helped me with homework, and pushed me to learn a second language, English; he dedicated his life to work and our family, but unfortunately, six years ago he lost the battle against pancreatic cancer — nine months of chemotherapy and meds, nine months that he did not stop teaching me and guiding me. Today, he can’t be with me physically, but he’s still with me in my heart. I am also the daughter of a warrior. My mom gave up everything, career, story, and family, to allow me and my brother to build a life in a country where we could walk on the street without the fear of it being our last day of life, a country where we had more opportunities. She raised two kids on her own with a lot of work, and every day she encourages me to be the best, to face my fears and follow my dreams.

Four years ago, I wouldn’t have thought I would be here. We are all immigrants, surrounded by people with stories and cultures different from our own, about to conclude another cycle … During my first year, I met a girl who had the same name as me, and she used to live in the same city as me! What a coincidence. I also met people who came from the same country as me, and had a different reality than mine, because before that I could not imagine a town so small and with so little resources, but it’s thanks to them that I learned a little more about my own country and all its beauty, its costumes and accents. I admit that in the beginning I didn’t fit in, anywhere, and this world was scary, but it was also new and filled with opportunities … It was another challenge.

So then, during our sophomore year, we took our MCAS; seriously, I had never been so nervous before a test. In the blink of an eye, it was junior year. My mom decided to move off-Island, and I had to leave my friends, who at this point were as family. We did not adapt well; in December we were back. That was our prom year, in between the guys with their tuxes and the girls with the most pretty dresses, we went to the M.V. Museum and the Allen Sheep Farm in Chilmark for pictures, of course we were late, but our pictures were amazing. That was when I started to notice we weren’t kids anymore, we were becoming adults — responsible and resilient. Many of us were working and going to school at the same time, helping out at home as much as possible, because that is our life as immigrants, or as the children of immigrants.

Many of us hear comments like, “Go back to your country,” or, “Here you will never achieve anything,” ̈”Brazilians only like to party, they’re lazy.” We have been through many difficulties, learning a second language and gaining confidence to speak that new language in front of others, and I can say with certainty that I am incredibly proud of my colleagues that learned a new language in such a short time and today speak it so well. One difficult side of being an immigrant is having to choose between driving without a license or riding a bike in the snow to go to work, to get paid less than everyone to pay for a room … some of us had to see our parents in that situation, and some of us were in those situations, and those are only some examples. Last summer, some of us were working two jobs, and enjoying the beach together became impossible, but it was important, it was the start of our adult life. We gained responsibilities inside and outside our homes, we started to gain consciousness of what we wanted for our lives, in the sense of what career to follow, or simply what kind of person we wanted to be.

Our last year started with the loss of a dear colleague, and that was eye-opening, because nothing, absolutely nothing, is more important than our health, emotional, physical, and mental.

In the name of my classmates, I would like to thank Mrs. Norton, Ms. Cluff, and Mr. Foley for being more than just teachers, and dedicating their lives to this group of people who come from a different country but have so much to offer, so thank you. I particularly have so much to thank Mrs. Norton, not only was she my mentor during the past four years, but she also gave me the support I needed during each moment, she was one of the people that supported me the most and also supported many of us … we would not be here if it wasn’t for so much time dedicated to us. I also want to thank the American people that welcome us in school, and support us on the Island.

The students of the class of 2020 were born during a time where terrorism had shocked the world in 2001; we were born with the obligation to be strong, and resilient, and that means that nothing will stop us from being our own success and be the best version of ourselves. The past few months were a big challenge, we did not have our last moments in class, we could not say bye to all our teachers and friends. However, together but apart we are getting through and surviving a pandemic, while fighting against another epidemic, racism. I am proud to be part of this community, to say I am Brazilian, and that I am surrounded by people who no matter the situation would always try to help one another. I am sure that each one will achieve our dreams, we will not be quiet before injustices, we won’t give up. To finish up, excuse me to quote a Brazilian writer, one of my favorite writers: Paulo Coelho. He says that “when you really want something, the entire universe conspires so that you achieve it”; I hope the universe conspires in our favor on this next phase of our lives, so that we become the best version of ourselves and continue to conquer the world. Congratulations to us, class of 2020, you are amazing … Thank you for making the past four years of my academic life absolutely unforgettable. 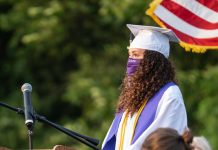 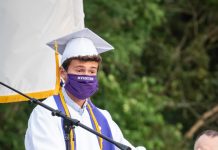