Jonathan Brian Douglas was born in Pittsfield, on St. Patrick’s Day, 1954, his mom’s birthday and her greatest gift. He grew up in the Berkshires, and spent time in the summers on Cape Cod. 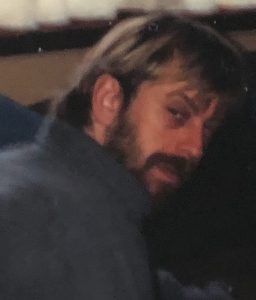 Even as a little fellow he liked go-karts and minibikes. As a teenager, he went over to New York on Sunday mornings to race his car at Lebanon Valley Speedway. He also loved motorcycles and sports cars, had several, and eventually learned how to rebuild them.

Jon graduated from Taconic High School in 1972. After high school he studied printing. He worked in that field, but eventually returned to the automotive trade, and got his license for driving big rigs, long distance. He bought his own blue and chrome Diamond Rio.

Jon took pride in every home he owned, and was always working on his homes, would build on dens and other rooms, and also made beautiful gardens.

He lived for a short time on Martha’s Vineyard, worked for the trucking company Barnes Trucking, and made a lot of friends fishing. He drove long-distance trips all over the country. He moved from New England to Palm Bay, Fla., and lived there for many years. He injured his back in a motorcycle accident. When his back hurt too much for driving, he went out and earned his hairdressing license. He began to practice this, but again his back hurt too much. Always ready to learn, he went on to learn to build computers.

He lived for many years in Florida.

Eventually, he moved back to his love, the mountains, to Lake Lure, N.C., joined Lake Lure Baptist Church, and made many wonderful friends there.

Jon is survived by a brother, Curt Douglas of Goodyear, Ariz., a sister, Amarylis Douglas of Martha’s Vineyard, and his two daughters, Heather Douglas and Melanie Roucoulet, both of Pittsfield, and several grandchildren, a great-granddaughter and many, many nieces and nephews around the country. He was predeceased by his sister Pamela Heye, formerly of Knoxville, Tenn., and his brother Tim Douglas, formerly of New York City.

Donations can be made in his name to St Jude Children’s Research Hospital, at bit.ly/MemorialsStJude.