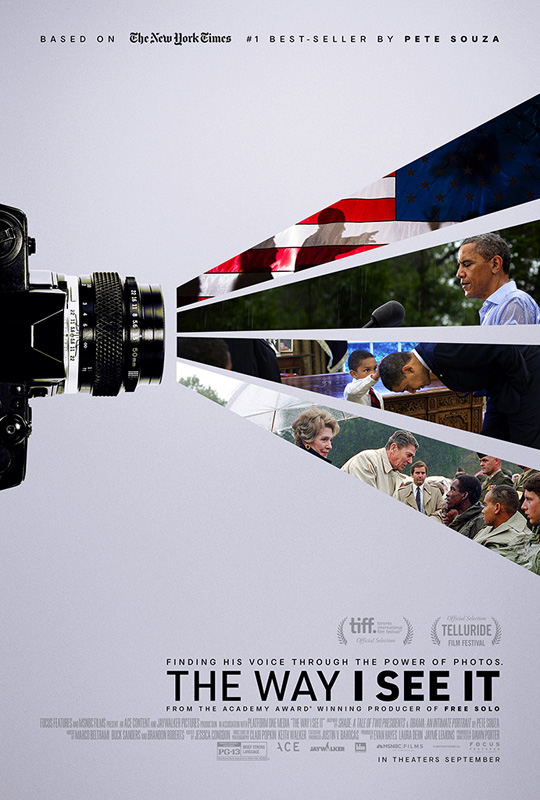 “The Way I See It” opens at the M.V. Film Center on Friday, Sept. 18. A compelling documentary, it describes the work of chief official White House photographer Pete Souza, who captured through his lens former President Barack Obama during the eight years he served as president. At the same time as it examines how Souza performed his function in “The Way I See It,” the film is also a much-needed tribute to Obama.

Souza’s first White House experience was to shoot images of former President Ronald Reagan from 1983 to 1989, and viewers will see him at work in that role. He turned down the Reagan offer at first, but then changed his mind. The amount of access is totally dependent on the president, he suggests. And the advantage of a still photo is that it stops time.

After completing his service with Reagan, he was a freelance photographer for nine years. Some of that time he spent with Obama in the two years he was in the Senate. Souza saw that the camera didn’t bother Obama at all. Among the places he visited with Obama was Kenya, where he watched as thousands were waiting to hear him say a few words.

Souza felt he had the right temperament to be president. “I knew he had a shot,” the photographer said. Obama went on to become the first black president in history. According to Souza, he represented a different kind of politician, one that resonated around the world.

Being White House photographer meant working nonstop every day, 24/7. The experience led him to conclude that a president was defined by three qualities: leadership, character, and empathy. The film most fully illustrates the former president’s empathy, how he hugged ordinary people who had suffered a tragedy, like the Sandy Hook massacre in Newtown, Conn.

Souza didn’t start out wanting to be a photographer. Once he attended Boston University, he decided, “This is what I want to do,” and it was the beginning of a lifelong career. After college, he earned a master’s degree in journalism and mass communication at Kansas State University.

Once he began working for Obama, Souza decided intuition was important. The Afghan war after 9/11 “was the most important thing I’d ever done,” he says. He shot photos of Obama meeting with injured soldiers and family members of those who had died. “This is the real cost of war,” he says in the film.

One of the worst days of Obama’s presidency occurred at Sandy Hook in 2012. It was there that he concluded there is no substitute for empathy. One of Souza’s iconic images was taken in the Situation Room, as the raid took place that killed Osama bin Laden.

“One of the most interesting parts of my work was to see him in all aspects of his job,” Souza says in the documentary. A particularly emotional day came when the Supreme Court ruled that the 14th Amendment guaranteed the right to marriage of same-sex couples.

While Souza made a conscious decision that he couldn’t speak out politically when serving as official White House photographer, that choice eventually changed. He became a political advocate, calling attention to the harm President Trump was doing, and the need to call that out. “He bullies people, he lies … This is not who we are,” Souza says. “Now I am political.”

“Shade: A Tale of Two Presidents,” Souza’s most recent book, came out in 2018, and compares the Trump and Obama presidencies. “‘Shade’ drives home Obama’s humanity and dignity and Trump’s petty mind and epic failings like few other documents,” observed Rolling Stone magazine.

Most important is the way Souza celebrates Obama, something that needs to be documented now that we have a president who aims to negate everything the former president accomplished.

Information and tickets to “The Way I See It,” playing only at the Film Center, are available at mvfilmsociety.com.