Everyone knows about the early panic buying at the beginning of COVID-19: the toilet paper, the yeast, the flour, the butter, but I just read that the horticulture industry experienced a surge in demand as well.

My first foray into gardening took place on my 7th birthday. My mother had given me a flat of purple pansies, which I promptly planted out by the garbage cans because there was mud there. The next morning there was a note from our mean landlord taped to the back door. It read, “do not plant anything without my permission.” I ran out and there were my beautiful flowers, limp and gasping for breath.

It probably put me off anything to do with nature and growing things for decades to come.

But last year my husband and I planted our allotted six plants each of cannabis. We did a little research; not enough apparently. Turns out there should be a “me too” movement for the female marijuana plants. Because the boys are ridiculously disrespectful and before the innocent girl plants reach maturity, they become hermaphrodites. We managed to salvage five females, harvesting us about three ounces which in our advancing dotage is really all we need anyway.

So pot-wise we were satisfied, and when spring came around this year we decided to forego the happy hemp and plant real food. This would be our first Vineyard garden.

We had so much fun shopping for seeds and starters, those little green pots with beginner cukes and baby beets and sprouts of Thai basil.

We would be released from our dependency on the big grocery stores and maybe we’d even become vegetarians, and if the results proved to be abundant and taste worthy we could even set up a stand at the end of our driveway. Free! We would hand-print on a cute sign.

Instead of starting a whole new garden we used the same raised beds and the same soil from last year with a little added fertilizer, but we were still lacking in the research department.

In June when the thousands of the sweetest-ever snap peas climbed to the sky, their tendrils winding and curling and reaching for the sun producing those beautiful white flowers, I proclaimed we were pros extraordinaire and would probably take our first of many-to-come blue ribbons at the Ag Fair.

Then came July and the spinach seemed to wilt and get smaller instead of bigger. I thought I spotted an eggplant but it was just a bit larger than a red grape. So maybe it was a red grape.

August arrived and at first the tomatoes looked as if they were going to give me spaghetti sauce for life, but out of five plants (and granted maybe that’s not enough) only three are producing and not in any great amount. They’re ripening in stages. Half the fruit is red and the other half is yellow and splitting.

The broccoli went to seed. Something ate the kale. The onions stopped growing completely and we have yet to check on the potatoes.

I had fallen in love with the scent and the look of a big white flower that my friend Sue grew last year and she sent me several seeds. I soaked them according to her directions, planted them and now they are flourishing in my tiny flower garden. The only thing is, when I Googled to get more information I learned that the leaves of the Datura plant are poisonous. So now I’m actually afraid of my own garden.

My father-in-law had a great garden in Needham when it was mostly farmland; it was where my husband grew up. But he was a kid and riding horses was more exciting than pulling weeds. My parents had a victory garden but it was seven blocks away and I was only 3. So neither of us really has had experience with a full season of understanding soil and reaping any bounty.

The little work I did this season was hard and exhausting. My back ached and my fingers hurt. I understand why farmers have eight kids.

I don’t have eight kids.

My back is feeling slightly better and my fingers are too. And I just got my flyer from Stop & Shop and when I was in Cronig’s yesterday, I realized both stores have sales on spaghetti sauce.

This garden thing is gonna be a real toss up, come spring. 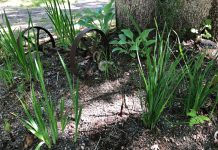 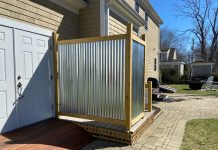 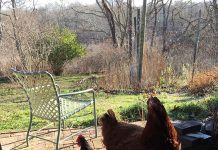