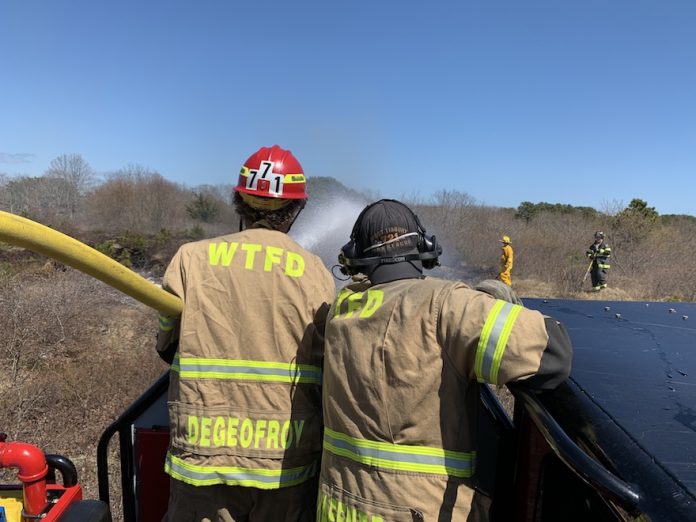 As part of an Island-wide climate resilience initiative, Martha’s Vineyard Commission staffers came before West Tisbury selectmen Wednesday to present some of their work to date, their goals going forward, and to illustrate what dangers climate change poses for West Tisbury specifically.

MVC Adaptation Master Plan subcommittee member Meghan Gombos told the board hazards and changes anticipated for the region include “hotter summers and warmer winters,” warmer and more acidic seas, sea level rise by 2050 from six inches to one and a half feet, “more heavy, intense storms,” and storms in greater frequency.

She said based on information from community resiliency workshops, among other sources, West Tisbury is “less vulnerable to sea level rise” but harbors great concern about wildfire.

“You have a lot of homes, commercial buildings, and infrastructure that’s at risk to wildfire,” she said. “So this is really a main concern for West Tisbury.”

Gombos went on to say West Tisbury has a “high dependency” on electricity to produce water, so power outages could be especially problematic for the town.

She noted West Tisbury received a clean energy grant to investigate how building in town can be more resilient to power outages. “And particularly with the concern of water and making sure that everyone has access to water,” she said.

Gombos pointed out West Tisbury is one of three Vineyard towns with an active climate advisory committee. That committee has already generated outreach material for emergency preparedness for wildfires and storms, she said. She congratulated West Tisbury for being the first town to pass the Climate Action Resolution.

“I think one of the things that our town is going to have to focus on is the State Forest,” she said, “and how to get a stronger management system in place. [M]itigation is what we voted for at town meeting, 100 percent renewable, but from the adaptation side, we really need to work on there being a permanent person at the State Forest, there being a good plan for wildfire management, and there being a way for all those communities that abut the State Forest to have good emergency escape plans. Because we’ve all seen what wildfire has done in the West, and you have very little time to respond. We need to be sure we’re ready for that. That’s our town’s big issue.”

There are other voices out there