Richard Gordon Leahy (“Dick”), age 91, of Westwood, formerly of Chestnut Hill, died of natural causes on Nov. 19, 2020. Married for 67 years, he was the beloved husband of Sarah Griswold Leahy. 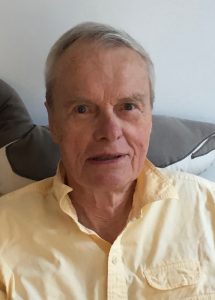 Born in Buffalo, N.Y., on March 6, 1929, Dick was the son of Leon and Gladys (Hanley) Leahy. Dick attended the Groton School in Massachusetts, where he made many lifelong friends. During the summers off from school, Dick, his younger sister Barbara, and his parents spent some of their favorite days at their fishing and hunting camp on Lake Pythonga in Quebec. Dick earned his bachelor’s degree from Yale University in 1952. While in New Haven, he met Sarah (“Sally”) Brooks Griswold. Dick quickly realized that he had met his match, and proposed to Sally after a few short months. Both students at the time, Dick and Sally married and moved to Cambridge, where Sally transferred from Smith College to Wellesley College to complete her bachelor’s degree, and Dick entered the doctoral program in geophysics at Harvard University.

Upon graduating in 1957 with a Ph.D. from Harvard, Dick and Sally moved first to Woods Hole and then Martha’s Vineyard, where they built a house. Dick worked at the Woods Hole Oceanographic Institution as research associate and assistant to the director of the institute. During his early years of marriage, Dick was often out at sea on the RV Atlantis, a 42-foot steel-hulled ketch owned by WHOI. In 1961, Sally and Dick moved to Chestnut Hill with their three young children, Sarah, Betsy, and Peter, and Dick began work at Harvard University, where he remained for the rest of his career.

During his years at Harvard, he was principally concerned with supporting the science faculty, facilities, and programs. He served as associate dean of the faculty of arts and sciences, and held a variety of other positions, including the director of laboratories of the division of engineering and applied sciences (now the division of applied sciences) and coordinator for governmental relations, office of the president. He also served as executive director of the New England Consortium for Undergraduate Science Education, and chairman of the board of the John von Neumann National Supercomputer Center in Princeton, N.J. Dick was chairman and member of the Commonwealth of Massachusetts Design Selection Board, overseer at the Boston Museum of Fine Arts and the Boston Science Museum, and trustee for the National Institute for Global Environmental Change. A champion of education, over the years he also served on the boards of trustees of the Park School, Groton School, and Smith College.

Many thought of Dick as a quiet, intelligent introvert, but those who knew him best recognized his sharp sense of humor, immensely generous spirit, upstanding character, and deep love of his family. Dick was fascinated with all things scientific, especially when related to climate, weather, and ocean, but he had many other interests as well. He loved music, theater, and most of all, art. He was a knowledgeable collector and profound appreciator. Dick was a beautiful skier who relished spending days on the slopes with family, and he surprised all with his dancing and figure skating abilities. On the Vineyard, he enjoyed duck hunting with his beloved black Labradors, and though not much of a swimmer, he loved boats and being out on the ocean. He was a skilled mechanic, carpenter, plumber, and electrician, and could fix almost anything. He played golf and tennis in his earlier days, and enjoyed watching both on TV in his later years. Throughout his life, Dick’s primary focus was his wife Sally. Together for almost seven decades, they were inseparable. Dick’s passions for the arts, science, and education were instilled in his three children and seven grandchildren as well. He was extremely proud of each of them, supported their educations, and followed their lives, accomplishments, and careers closely.

Services will be private. In lieu of flowers, contributions in Dick’s memory may be made to the Boston Museum of Fine Arts, 465 Huntington Ave., Boston, MA 02115 (mfa.org).