Ann Thoron Hale died peacefully on Nov. 25, at the age of 92. She lived a full life. 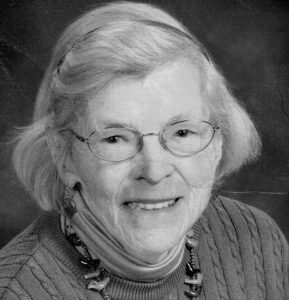 Born on March 13, 1928, in Washington, D.C., she was the daughter of Violet Spencer Thoron and Benjamin Warder Thoron. She attended the Potomac School and Chatham Hall before earning a degree from Teachers’ College in New York City. She taught elementary students until her marriage, when she and her husband, the late George Hale Jr., moved to San Francisco, Calif. In those early years, she participated in the Children’s Theater before finding her true love, the San Francisco Zoo, where she volunteered for more than 30 years in the education department.

Martha’s Vineyard was Ann’s true home. As a teenager she spent her summers on Seven Gates Farm, much of it in the family house of High Hope, which is still enjoyed by many family members. She cared passionately about the farm, joining the board of directors and ultimately becoming president in 1992. She is fondly remembered there for her steady leadership, honesty, and spirited demeanor. She moved to the Vineyard permanently in 2002, and remained there until 2012, when she moved to Carleton Willard Village in Bedford, where she resided until her death.

Ann was passionate about the natural world and its conservation. Never without binoculars and a nature guide, she was an avid and accomplished birder, often heading to wildlife refuges during the spring migration. In her later years she was keenly involved with numerous conservation organizations, including the Woods Hole Oceanographic Institution, the San Francisco Zoo, and the Ocean Conservancy. Her love of nature and an adventurous spirit took her all over the world, including visits to Japan, Cambodia, Europe, Australia, the Galapagos, and Antarctica. Africa was a favorite; she visited the continent numerous times, most recently taking her children and grandchildren on a memorable visit to Tanzania.

Ann is survived by her son Christopher, daughter Cynthia, and daughter-in-law Wendy; five grandchildren, Rebecca, Naushon, Tristan, Spencer, and Hunter; two great-grandchildren, Aster and Tima; and five nieces and nephews. She was predeceased by her two brothers, Christopher Thoron and Sam Thoron. Ann’s passion for nature, animals, the arts, and travel was infectious, and has been passed on to her children, grandchildren, and all who knew her. She will be greatly missed.