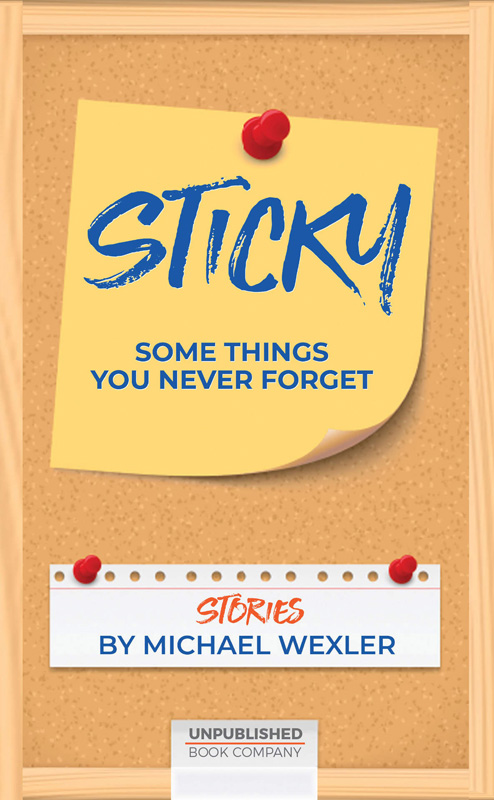 In April, I reviewed The Times’ sometimes freelancer Michael Wexler’s book “The Work From Home Survival Guide,” and admitted it cracked me up. Last week I willingly read “Sticky: Some Things You Never Forget,” and I have to say, I laughed all the way through it. Wexler’s first book, “Voices of the Xiled,” was published by Doubleday in 1994; “Sticky” is his eighth and most recent book. He lives part-time in Oak Bluffs and in upstate New York, near the Finger Lakes.

“Sticky” takes you on a trip through Wexler’s hippocampus as he begins with a grade-school memory — the time the principal came to his fourth grade classroom and whispered in his ear, “Come with me.”

Wexler writes, “At this point, I was convinced that somebody had died and gone to heaven, or worse yet, that the school had found out that I was selling candy, acquired from my grandfather who knew somebody in New York City, to kids at Hebrew School in individually wrapped and labeled brown paper bags (full service).”

Instead, the principal walked him to the school library, where he was introduced to a high school student described as having “a pair of Coke-bottle glasses that wrapped around his head like a snake and were held in place by a black elastic strap. He looked like … a dork.” The dork was a computer wiz at a time when information was stored on floppy disks, and Wexler and another young student were allowed to spend an hour a week in the library with the wiz kid to help his teachers measure whether computer skills were a good thing for students.

This was in Highland Park, N.J., where Wexler’s mother moved him and his brother to be closer to her parents after his father and mother divorced. This experience put young Wexler on the path to learning more about technology than most kids his age, and he took to computers like butter on a biscuit. In fact, his mother was seeing the head of Rutgers’ computer department at the time, giving Wexler access to an even more challenging computer lab. He was developing and cracking computer codes at a very young age. Then one day, after cracking the game Wizardry, Wexler decided he was done with the geek squad. He had “climbed to the top of the mountain and there was nowhere else to go.”

The reader rides the next little wave of the author’s literary canoe trip into high school, where Wexler is a self-proclaimed “SUMJD,” or “semi-upper-middle class Jewish degenerate.” In other words, Wexler finally fits in with a group of friends, and they hang out together regularly, and even maintain their strong friendship into college. They call each other “the HPs,” after their hometown, and spend college breaks visiting one another rather than taking off to Aspen or East Coast beaches. His college gang was made up of a mismatched band of brothers with nicknames like Sloopy, Richie Rich, the Gin Man, and the Dogger. They make it through a litany of college pranks, like dropping a live chicken into the middle of a frat party to stealing a golf cart for a joyride to getting pulled over and telling the police officer that the driver’s ID was “in his butt.”

The book is filled with “sticky” memories, from Wexler’s postgraduate days spent writing books for middle-grade readers in a basement apartment back in his hometown to trips to Atlantic City, where he played hours and hours of poker with the boys, to Kansas City where he taught while getting his master’s degree to — long story — a trip to Belize with the CEO of a demolition company. All along the way you wish you could hang out with the guy over a long weekend, maybe in a Jersey Shore beach house, well stocked with a pony keg and maybe something stronger. Most of all, Wexler’s book reminds us all that we have those same sorts of memories — they’re not all pretty, but they do make up who we are.

The Times asked Wexler a few questions about “Sticky.”

How long did it take you to write ‘Sticky’?

Um, it took me about 40 years to write “Sticky,” because the stories in it are a compilation or collection of those little nuggets of hard-to-forget sublimity that occur over the period of a lifetime, or half a lifetime, or however long 40 years is relative to the end. The actual “writing” probably only took seven years.

Why did you write it?

I had to. No, really. I dragged out graduate school from the age of 30 to almost 40, and at a certain point they (UMKC in Kansas City) told me that I had to graduate or else they were going to kick me out. Who would want to leave school? When I defended my master’s thesis in creative writing, which “Sticky” was, they said, “Sorry,” at the end of the defense. “Now you have to graduate.” I took that master’s thesis, polished it, and “Sticky” is the end result.

Are you a freelance writer, a writer, an author, or a teacher right now? Or candlestick maker, maybe?

My Facebook bio says “tinker, tailor, soldier, spy,” which is how I kind of think of myself. (Keep in mind I’ve also recorded five records, lol [you can find them at bit.ly/wexlermusic], and I work at Alley’s General Store. So I don’t define myself as a writer, to be honest, but you can call me that if you want.

Are you working on a book now? If so, what’s it about?

Yes. I am working on a book called “A Whole New World.” It’s about how to change the world, but not in the sense that phrase is usually employed. I mean literally changing the world, like making it look different, operate differently, happen differently, have different sounds, colors, sights, and smells.

What do you hope people get as a takeaway if they read it?

Nothing. Stay light on your feet.

I asked Wexler to send me a copy of “Sticky” so that I could read the book and review it. I marked it up in pencil just in case he asks me to return it to him. He’s a funny guy, and I don’t want to think of him living in that basement apartment ever again.

“Sticky: Some Things You Never Forget” is available online through the Unpublished Book Co. website, unpublishedbookcompany.com/sticky.