A lot has happened that we did not imagine at this time one year ago. Stating the obvious, the year 2020 has been a procession brimful with unusual experiences and painful adaptations, one after the other. We look forward, hopefully, to the fresh start of 2021!

One of the endearing human qualities we possess is the desire to measure ourselves against our principles, and to seek to live up to them in good times and in bad ones.

In that spirit, I offer nine resolutions, author unknown, that longtime readers have read here before:

~No one will ever get out of this world alive. Resolve therefore to maintain a reasonable sense of values.

~Take care of yourself. Good health is everyone’s major source of wealth. Without it, happiness is almost impossible.

~Resolve to be cheerful and helpful. People will repay you in kind.

~Avoid zealots. They are generally humorless.

~Resolve to listen more and to talk less. No one ever learns anything by talking.

~Be chary of giving advice. Wise people do not need it and fools will not heed it.

~Resolve to be tender with the young, compassionate with the aged, sympathetic with the striving, and tolerant of the weak and wrong. Sometime in life you will have been all of these.

~Do not equate money with success. There are many successful money-makers who are miserable failures as human beings. What counts most about success is how a person achieves it.

Our neighborhood chicken keepers have lately been plagued by hawk attacks and poultry losses. Yesterday, I came home from work to find terrorized hens, missing geese, a partially consumed hen, and one large red-tailed hawk entrapped between shrubbery and fencing.

The hawk rocked back, quietly hissing and showing her talons; I decided to leave her alone. By morning she would figure the way out and be gone; or I would have to deal with her.

I went out early to find that the hawk was still there. Knowing we have a good-sized dog crate, I decided to capture the bird and get her into the crate to keep the situation under control. I grabbed a handy bath towel and crawled into the bushes after her.

She tried to evade me and I then noticed that she flopped and seemed to be limping. Again she reared back against the fencing; I was able to throw the towel onto her and grab her by the legs, with only a tiny puncture from one of the razor sharp talons (towel worked well!). As I did so I noticed her weightiness, and a red lesion on the underside of her left foot.

Somehow I crawled out of the confined space without losing my grip on the legs or damaging the hawk or outspread wings further. She glared at me fiercely out of large dark eyes, beak open and tongue extended, my own small captured eagle. After I got her safely into the crate and called the communications center, I was directed to call Gus Ben David, the Island’s go-to person for similar predicaments.

As may not be widely known, predatory animals such as red-tailed hawks (Buteo jamaicensis) are federally protected because they inhabit integral niches in ecological habitats. Much of their prey consists of small rodents and rabbits that would otherwise be a plague upon us.

Apart from Native Peoples, it is expressly forbidden to possess any part of these federally protected animals, even so little as a shed feather. Learn more about these beautiful creatures here en.wikipedia.org/wiki/Red-tailed_hawk.

Gus expertly handled the hawk out of the crate. He performed a quick examination, exclaiming at her size, and noted there were no feather lice. The lesion of the foot looked to him like bumblefoot, a staph infection that may also afflict older, heavier domestic fowl that land heavily off the perch.

Gus explained that if they are whole and healthy, predators are able to hunt efficiently. However, being compromised often contributes to their seeking easy prey, such as backyard chickens. He will attempt to rehabilitate the hawk, which he is licensed to do. For now though, there is one less danger to our huddled neighborhood poultry.

As the photo in this column shows, plants that are utilized as decorative accents may easily step out of that role without proper care. Micanthus grasses as a species are strikingly beautiful. Most, although not all, are outsized plants that create dramatic accents in landscapes and garden settings.

Therefore it may seem counterintuitive to be advising that proper care is the cutting down of decorative grasses now, as plumes achieve visual prominence. Why, you may ask, would I cut them down now, just as winter winds cause their movement to be so dynamic and beautiful, and when there are no flowers in my garden?

The answer is that by cutting down now, winter winds are prevented from shattering and spreading the seed in the plumes. Reseeding, like that shown in the photo, is largely prevented. What is beautiful and distinctive as a well-maintained planting is lost when instead you are looking at something resembling a large stand of Phragmites.

Many other species of decorative grasses, especially North American natives, are worthy of inclusion in the garden palette. Check out online resources, encyclopedias of grasses, and plantings at Polly Hill Arboretum.

One of the endearing human qualities we possess is the desire to measure up to our higher principles, and to seek to live them in good times, and in bad ones. We can do this — Happy New Year! 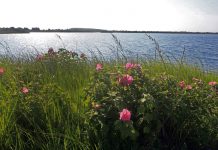 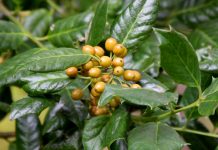 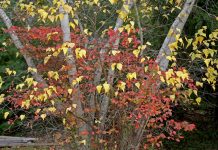