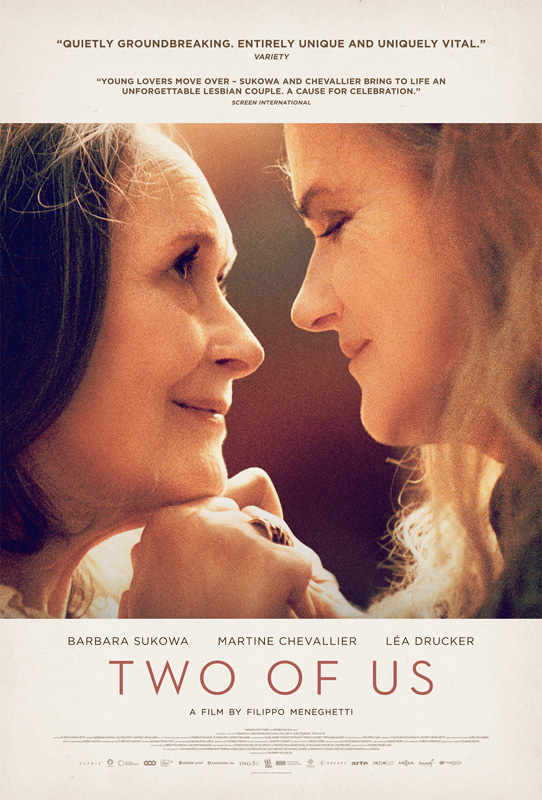 “Two of Us,” a heartbreaking story of lesbian love, starts tomorrow, Friday, Feb. 5, virtually and at the M.V. Film Center. While their love might seem entirely acceptable in today’s world, it’s not so, considering the age, culture, and location of these two gay pensioners.

Lippo Meneghetti directed his first feature, shown at the 2019 Toronto Film Festival. It stars German actress Barbara Sukowa as Nina Dorn, and Martine Chevallier as Mado (Madeleine) Girard. Awardwinning Sukowa is known for her Rainer Werner Fassbinder and Margarethe von Trotta roles, and Chevallier for hers at the Comédie-Française.

“Two of Us” is set in provincial Southern France, and narrates a love affair that has gone on secretly for many years. The film opens with two girls playing hide-and-seek in an idyllic park near a river, and it foreshadows what follows. The next scenes show Nina and Mado sharing apartments across the hall from one another, to which they discreetly withdraw when occasion makes it necessary. The fact that their passion, well-illustrated with physical intimacy, remains hidden becomes clear when M. Brémond (Hervé Sogne), a realtor, comes to discuss putting Mado’s apartment on the market. Nina, the more open of the couple, wisecracks about their being “two old dykes.” Nina is busy making arrangements for them to move to Rome, where they first met, and plan to live openly as lesbians.

A fly in the ointment develops when Mado’s two adult children, Anne (Léa Drucker), her son Frédéric (Jérome Varanfrain), and her grandson Théo (Augustin Reynes) come to celebrate Mado’s birthday. With Anne as a divorced hairdresser, the film suggests these characters are less than upper-middle-class, or at least not intellectuals. The birthday celebration offers Mado the occasion for telling her children that she plans to sell her apartment and move to Rome, but she avoids announcing it. She also has told M. Brémond that she has decided not to sell the apartment, which she shared with her late husband.

Nina, the more emotional of the two, is furious about Mado’s reluctance. Then in a close-up of food burning in a frying pan, Nina discovers that Mado has taken ill, and calls an ambulance. It turns out that Mado has had a debilitating stroke, and can no longer speak.

The film quietly illustrates how Nina’s intimacy with Mado doesn’t register with those at the hospital. Once Mado returns home, the next obstacle occurs in the form of Muriel (Muriel Bénazéraf), a caretaker who has been hired by Anne. When Nina tries to care for her beloved, Muriel resists. With keys to Mado’s apartment, Nina slips in at night to spend time with Mado, and the film conveys the tension between Nina and Muriel. Eventually Muriel is fired as a result of Nina’s sometimes violent machinations, including smashing Anne’s car and later a window. It becomes evident that Anne suspects the nature of Nina’s relationship with her mother. In time, Mado is confined to a nursing home, but Nina plans to escape with her to Rome.

“Two of Us” effectively conveys the pressures that these two late-in-life women undergo without either sentimentalizing the story or turning it melodramatic at the end. As Nina, Zukowa delivers a powerful performance, one the viewer will not easily forget.

Information and tickets for “Two of Us,” both virtually and at the Film Center, are available at mvfilmsociety.com.