Antone Alves Bettencourt Jr. (“Tony”) died peacefully at home on Tuesday morning, Feb. 9, 2021. He was born on April 15, 1942, and lived in Edgartown his entire life. He was the son of Antone and Adeline Bettencourt. 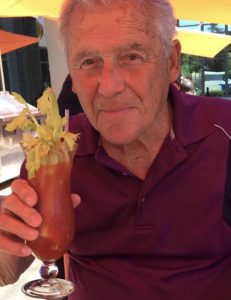 Tony was a gardener with an amazing green thumb. He would often be seen tending to the dahlias on the walkway of the Emily Post house on Fuller Street. In his earlier years, he was also a commercial scalloper.

He joined the Edgartown Fire Department in 1962, and moved up in the ranks to fire chief in 1988. He would remain chief for 17 years, until his retirement in 2005. His 43 years of dedicated service is something his family will cherish forever.

He was a board member of the Edgartown Boys Club on High Street, and grew up just a stone’s throw away. He worked hard with other volunteers to build the new club off Robinson Road, where it remains to this day.

Tony became an avid golfer, eventually joining the Edgartown Golf Club. He met great golfers over the years, many of whom became lifelong friends. He played seven days a week, in any weather. He would play in every Island benefit tournament he could. In fact, he recorded six holes in one, which any golfer will tell you is an amazing accomplishment!

In his later years he enjoyed the winter months in Florida, of course playing golf, with an occasional trip to the casino. In the photo he can be seen celebrating a BIG win in Foxwoods: a photo that explains his love for life, family, and friends!

He was laid to rest on Feb. 12 in the New Westside Cemetery, quietly, the way he went out, surrounded by his immediate family members.

In lieu of flowers, donations can be made to the Visiting Nurse Association of Cape Cod – Hospice, online at support.givetocapecodhealth.org/donate.

Arrangements are under the care of the Chapman, Cole and Gleason Funeral Home, Oak Bluffs. Please visit ccgfuneralhome.com for online guestbook and information.