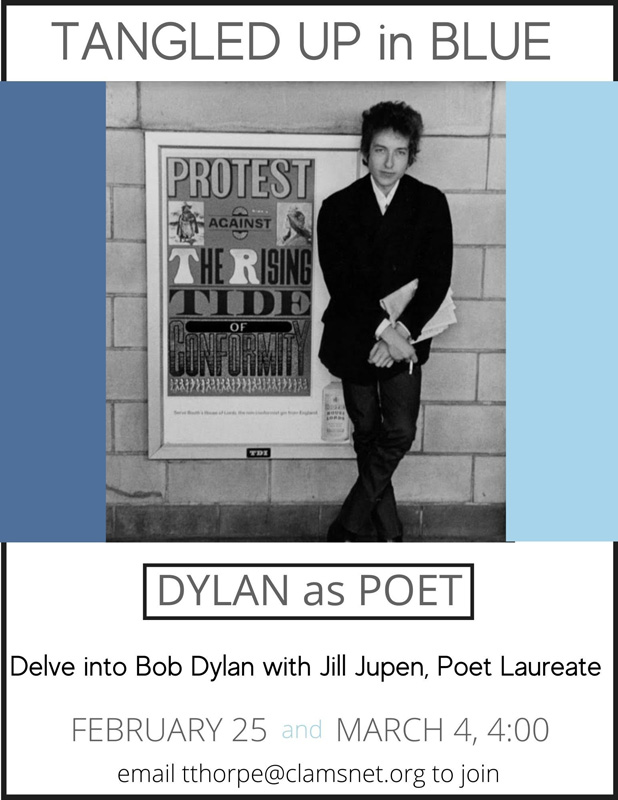 Island poet laureate Jill Jupen says, “It’s all things Bob Dylan all the time” around her house right now, as she diligently prepares to offer a two-part, interactive program where she will delve into Dylan’s work — its breadth and depth, its evolution, and its legacy for troubled times.

Dylan, born Robert Zimmerman, began performing folk songs in coffeehouses, renaming himself after the Welsh poet Dylan Thomas. He has been recognized by many greats over the years, including Allen Ginsberg, who called him the greatest poet of the second half of the 20th century, and British former poet laureate Sir Andrew Motion, who has said he listens to Dylan almost every day. Per Wästberg, chair of the Nobel literature committee, said he is “probably the greatest living poet.” Certainly, no other rock musician has had their lyrics more analyzed, anthologized, and eulogized.

We talked to Jupen recently about her upcoming Zoom workshop “Tangled Up in Blue: Dylan as Poet.” The workshops will run on Thursdays, Feb. 25 and March 4, at 4 pm.

What do you hope we will walk away with from your program?

I now have eight books about and by Dylan that I’m reading. And I’m listening to 101 hours of his “Theme Time Radio Hour,” to be ready to encourage all Dylan fans and nonfans alike to join the conversation and recite their favorite Bob Dylan metaphors. I hope people walk away with a greater understanding of his work, an appreciation beyond the music, a glimpse into what an interesting person he is outside of the man they may have seen on stage.

What made you want to offer this program?

I was looking for something different to do with the people on the Island who were interested in poetry, and I have always felt Dylan’s lyrics and use of metaphor rightfully earned him the Nobel Prize in Literature. Also, at least three universities offer classes on Dylan’s writing: Harvard, Oxford University, and a university in Montreal. I have two of the textbooks from these courses, and after reading them, realized there’s a lot for poets and lovers of poetry to learn from him. I certainly hope people will join in and we can discuss specifics within his songs, where these images come from, how the French poets — and his love for the Greeks and Romans — are reflected within his writing.

What attracts you to Dylan’s work?

I like his lyrics. After he won the Nobel, I bought the huge, too-heavy-to-look-at-unless-you’re-sitting-at-a-table book of all his lyrics, and I sat down to read. I realized then how amazing each song was, and how effortless his use of metaphor and his use of storytelling seemed to be. I understood for the first time songs I had been listening to for years. He is a character in most of them. He’s the “ragged clown” that’s following the “Tambourine Man,” who might be the Pied Piper leading Bob away from the people he’d been so much a part of just the year before, when he wrote “Masters of War” and “It’s Alright Ma, I’m Only Bleeding” and “Blowin’ in the Wind.”

He never saw himself as the voice of a generation, or a prophet, or a leader of any kind. He wants to be led away from all that into tomorrow. I’m working on a quilt, and part of it has a full moon and stars, and around the stars, I’ve embroidered the line, “Yes, to dance beneath the diamond sky with one arm waving free.” That’s from “Mr. Tambourine Man.” It seemed like a good place to save it for me.

How did you get involved with poetry?

I wrote poetry in high school. I went to school about 20 minutes from the Canadian border in the Northeast Kingdom of Vermont. Poetry was never mentioned in that school. I think those teachers had been teaching the same novels for decades. Mostly you just had to show up. But I had one good teacher who had just graduated from Harvard, and was only there for a year, trying to avoid the draft. He would come in and sit on his desk and read us poetry or a short story, and sometimes at the end of class I’d be the only kid left in class. He made that year great. Then, when I went to college, my advisor hooked me up with the poet Hayden Carruth for an independent study. He lived in an old farmhouse a few miles down a bad dirt road. His wife had him living in a cowshed when I met him, staying up all night writing, and sleeping during the day, so I had to meet with him at 4 in the morning.

How do you think Dylan sees himself since he won the Nobel?

I’m still not sure I can answer that. I have read so many interviews he’s given through the years, and the answers he’s given to some reporters are hilarious. He doesn’t like to answer questions or talk about himself. He’s a very private person. It’s about the music, not him. He knows how some people feel about him, but, as he says, “They think they know me. They don’t know me, and I don’t know them.” I’m sure he was proud because the Nobel was saying something about his work.

“Tangled Up in Blue: Dylan as Poet” with Jill Jupen, poet laureate of Martha’s Vineyard, on Thursdays, Feb. 25 and March 4, 4 pm. Contact Tracy Thorpe at tthorpe@clamsnet.org for an invitation.