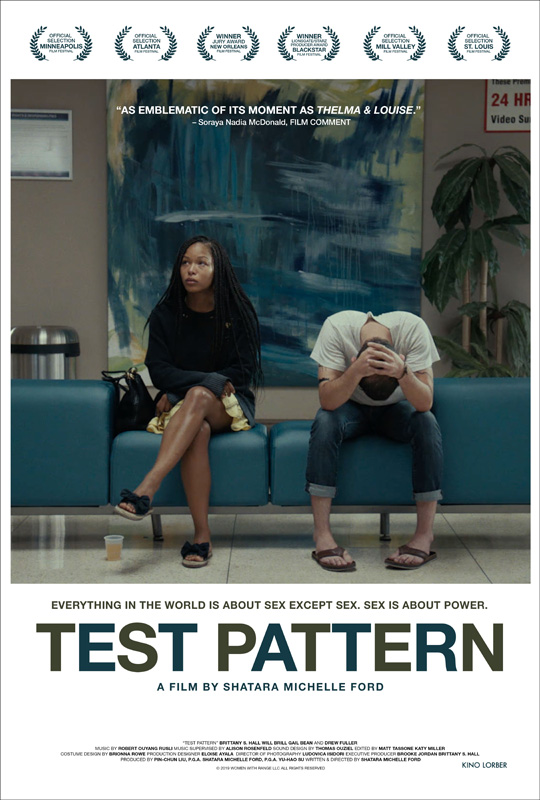 “Test Pattern” is one of three films available virtually through the M.V. Film Society this week. The term “test pattern” refers to the graphic broadcast by TV stations, usually at the end of regular programming. But that definition doesn’t directly reference the disturbing and powerful story of sexual assault in the film “Test Pattern.” It is director Shatara Michelle Ford’s accomplished debut film.

Set in Austin, Texas, “Test Pattern” begins with a scene in which a Black woman, Renesha (Brittany S. Hall), who is barely conscious, lets a predatory white man named Mike (Drew Fuller) take a glass from her hand. The rest can be imagined. The film shifts to an earlier scene and time, when another white man, Evan (Will Brill), asks for her phone number. Soon they have become a loving couple.

Flash-forward to Renesha at a nightclub, to the same scene at the beginning where she has left Evan at home and gone out with her friend Amber (Gail Bean). The episode grows in momentum until Renesha ends up drugged with alcohol and pot. From there, a clearly impaired Renesha is taken to Mike’s apartment. When she wakes up, she is not sure where she is or what has happened. Her assailant drops her off at Amber’s in his car, then abruptly drives away.

These opening scenes establish the focus for the rest of the story about what, in fact, has been Renesha’s sexual assault. Evan takes over, driving her to a hospital and asking for a rape kit. But the hospital says it doesn’t have the specialized nurse necessary for administering one. The two go from one hospital or medical center to another, looking for someone to employ a rape kit, frustrated by the bureaucracy and indifference that prevents them from getting the help they need. Friction begins to develop between Renesha and Evan, as Renesha is ready to give up and Evan insists on taking over.

As the story unfolds, Evan’s innocent yet institutionally valid sexism becomes clear. Renesha is a corporate professional with a graduate degree, while he is a tattoo artist. At one point he says he wants to “brand” her as his with a tattoo, a comment that seems innocent enough at the time. Once the assault happens, he doesn’t let Renesha, who is confused and distressed about whether she has allowed the assault to take place, manage what is happening. A subtle, underlying racism also becomes clearer from the earlier conversation at the bar among the women friends, all of whom are Black, about white people. The signs are subtle, but they are there, partly in the way the couple is treated at the hospitals, as well as how she felt about the white friends Evan takes her to see.

“Test Pattern” moves from showing how Renesha and Evan’s once-happy relationship begins to fracture, leaving the viewer wondering if it can survive Renesha’s traumatic event. It is an ending potent but realistic.

For information and tickets for “Test Pattern” and other virtual films, go to mvfilmsociety.com.