There’s an old saying that rings particularly true for working folks on Martha’s Vineyard — “you can tell a lot about a person by their shoes.”

In my landscaping days, it was the wheat nubuck Carolina’s, dyed forest green from the nonstop barrage of wet grass clippings from my lawnmower that distinguished me as someone who worked outside with their hands (the grubby T shirt also most likely gave it away).

And although footwear worn during leisure time can also say a lot about someone’s sense of style or fashion-forwardness, The Local wanted to take a deep dive into the working footwear of Martha’s Vineyard: boots.

They are the sneaker’s rugged cousin, and they come in all different shapes, sizes, and materials in order to serve certain purposes.

Whatever you sport when working, whether it’s a pair of well-worn Blundstones caked in dust from flooring a horse stall, or some tattered Xtratufs waterlogged after a day of harvesting oysters, the boots we wear work hard to keep us comfortably (and sometimes voguishly) on our feet.

We first checked in with folks from Island Grown Initative’s (IGI) Thimble Farm, where boots are really put to the test.

Emily Armstrong, education director for IGI, wears her Blundstones in school gardens, in the IGI community garden (which she oversees), and in the orchard at Thimble Farm, where she runs regenerative gardening workshops. “I actually don’t like my work boots! So they lose. I wear Blundstones, and they don’t seem to hold up longer than a year. I’m planning to switch to Redbacks,” Armstrong said.

Tim Connelly, field manager at IGI, helped install 17 new large soil beds in the Thimble Farm greenhouse this year, which he said destroyed his prized boots that he’d had for several years. “The soil beds ate my 8-year-old Red Wings, and I’m still mourning the loss. I don’t know if I have the emotional bandwidth to speak about them,” he said. “Hard for boots to toil in the fields, and harder still, it seems, for boots to work on the concrete floor of the greenhouse.”

Kat Soni, regenerative field captain at IGI, who also heads its community-supported agriculture program, said she is tearing up her Blundstones on the farm, and is looking for a new boot to put to the test at some point. “I like Muck Boots for general work in wettish weather, but I’ve got holes in those too,” Soni said. “The boot hunt is real.”

Matthew Dix, farm director for IGI, dissented from the rest of the team, admiring the functionality of his Blundstones. “I’m a Blundstone guy. I hate laces, and enjoy the flexibility and lightweightness of them,” he said. “I alternate with Xtratuffs on wet days, and I always wear Birkenstock clogs for morning and evening chores. The Blundstones last longer if they stay dry most of the time.”

The Local also checked in with Felix Neck Wildlife Sanctuary to see what kind of boots they wear around the office and in the field.

Liz Dengenis, naturalist and educator at Felix Neck, said she prefers wearing her Bangs sneakers at work because they are cheap, comfortable, and washable.

“I don’t have to worry about getting them dirty, and some of them are embroidered, which I love,” she said.

She added that the sneaker company donates money to small businesses both domestically and internationally with each shoe sold. “It’s nice knowing that my shoes are helping other people have their adventures while I have mine,” Dengenis said. “They are made of sustainable hemp canvas cloth — perfect for during work and post-work.”

Suzan Bellincampi, director for the Mass Audubon Islands region, said she used to do a lot of outside work, but is now in the office for a large part of her workday. Her go-to Blundstones are patterned after the giant leopard moth (Google it).

Bellincampi said she likes her boots because the pattern makes for a good conversation starter, and the kids in the Felix Neck Fern and Feather preschool “absolutely love them.”

“My job is all about nature and people, so to be able to have a conversation and kind of open things up is really important, that’s why I like the pattern so much. They are really fun, some people think they are Dalmatian spots, but I always explain that it’s the giant leopard moth,” she laughed.

Liz Cosgrove, office manager at Felix Neck, wears a pair of tall black leather boots that she says are good for casual office work, but are also comfortable and warm enough to be worn out around the property. “They keep my ankles warm, they keep my feet and legs dry. They are also vegan leather, so no animals were harmed in the making of my boots,” she said.

“They have the heavier, fully waterproof boots, but I like the lighter, more breathable ones,” Friedman said. “I’m going to be working on the beach this season. I am used to more mountain outdoor wildlife work, so we will see if I have to adjust my habits if my feet start getting wet.”

Of course, we had to talk with some Island salts to hear their take on their preferred boots while they’re out on the water.

Brothers Greg and Dan Martino of Cottage City Oysters say they are lucky if their boots last the season. “I think footwear is extremely important for people, especially for those who work in our industry, because you are constantly wet, and if you are working in the wintertime, you want something warm,” Greg said.

He prefers something that comes up to the mid-shin area, that can take a beating, and will retain its waterproof qualities. “Obviously you want durability, with the amount of gear that lands on your foot,” he said.

The two shellfishermen have been using Xtratufs, but say the boots don’t have the longevity necessary to survive in their line of work.

“Whatever gets retired from the [oyster] farm I’ll use as my gardening, outdoor-type work boot,” Greg said.

Dan noted that the brothers would occasionally wear tall fishing boots or tall Muck Boots, but submerging those in water turns them into cement galoshes.

“If you fall in while you are wearing those, they fill up and become anchors, so then we started with these ankle-high ones, but these usually don’t even last a year. Whatever you wear, it doesn’t last long when you do this type of work,” Dan said. 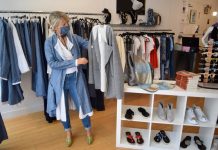 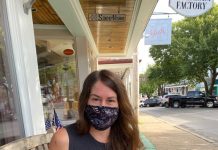 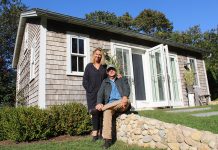