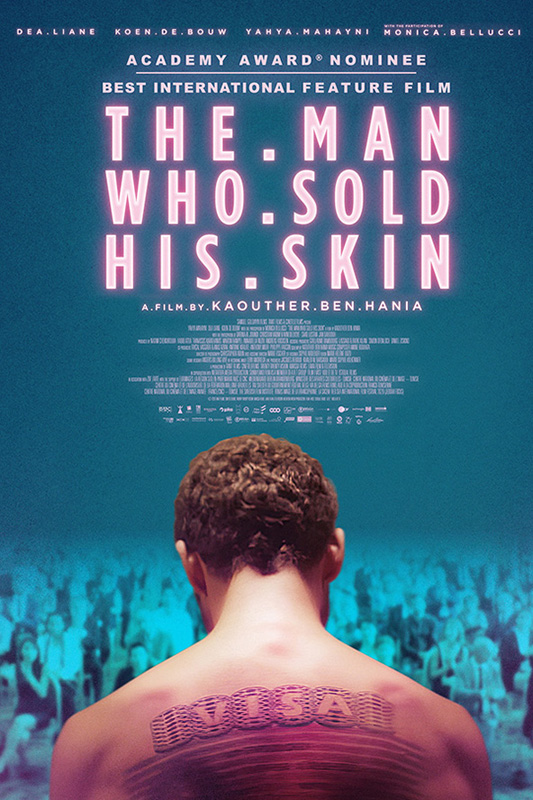 Opening this weekend at the M.V. Film Center and virtually on Sunday, April 18, and also playing Thursday, April 22, at the Film Center, is the compellingly bizarre new film, “The Man Who Sold His Skin.” It sounds like it might be a joke, but this film’s Tunisian writer and director, Kaouther Ben Hania, draws on an actual event. Belgian artist Wim Delvoye tattooed the back of Tim Steiner, called it “Tim” and sold it (him) to a German art collector.

“The Man Who Sold His Skin,” which satirizes the art world while examining the treatment of refugees, has earned an Oscar Foreign Film nomination. It is a first for a Muslim woman and a Tunisian film. The film narrates the story of an indigent refugee, Sam Ali (played by Yahya Mahyni), who is in love with upper-class Abeer (Dea Liane) and anxious to leave Raqqa, Syria. After observing celebrated but controversial artist Jeffrey Godefroi (Belgian actor Koen De Bouw) hanging a painting, the viewer sees a barebacked Sam sleeping in the film’s visual anticipation of what will follow. Two guards march him, apparently arrested, into a crowded cell. The scene switches to Sam with Abeer, together on a train. He asks her to marry him, joyfully shouting, “Revolution! We want freedom!” He is arrested again, but escapes, crossing into Lebanon. In this way, the themes of a decadent art world and the refugee crisis are interwoven into a single narrative.

One year later, a lovesick Sam is in Beirut, and sees Abeer in a wedding photo. In need of food, he sneaks into a gallery reception for Godefroi. The artist offers to get him into Belgium, where Abeer is now living with her embassy employee husband Ziad (Saad Lostan) in a marriage she’s been pressured into by her parents. The catch for Sam is that he will have a Schengen Area tattoo inscribed on his back, making him into an art commodity. That way he can travel freely in Europe and share in profits, as long as he allows himself to be on display at Godefroi’s exhibitions. The artist’s colleague Soraya (Italian actress Monica Bellucci) offers to help Sam, who has decided he wants to return to Syria.

The scene shifts to nine months later, when Godefroi puts Sam up for auction. After he is sold for 3.5 million Euros, Sam screams in protest, and members of the panicked audience race away. Once again, Sam is jailed, but this time he is released.

“The Man Who Sold His Skin” concludes with an ambiguous ending. It takes a unique and shocking theme and turns it into a statement about the art world and the refugee crisis. Viewers may find it an intriguing film.

Information and tickets for “The Man Who Sold His Skin” at the Film Center and virtually are available at mvfilmsociety.com.