The Martha’s Vineyard Surfcasters Association (MVSA) will again be pitted against the Nantucket Anglers Club (NAC) for the 17th annual Island Cup fishing tournament this year, which runs from June 12 to 19.

Similarly to last year, the competition will be held virtually. Before the COVID pandemic made in-person group events impossible, anglers from Martha’s Vineyard and Nantucket would take part in a kind of fishing exchange program. One year, folks from the MVSA would travel to Nantucket to fish, and the Nantucket anglers would host the Vineyarders at their homes. The following year would be vice versa, with Nantucket folks heading to the Vineyard to fish.

This year, the MVSA are the defending champions, although Nantucket leads the overall series, eight to seven.

The tournament is catch and release, using artificial bait only. Each angler’s total weight of one heaviest bluefish and one heaviest striper (no minimum length) landed and measured from the tip of the nose to the center of the tail is counted toward the team total. Fish lengths are converted from inches to pounds for fish caught by both teams; the heaviest team total wins the cup.

Co-founder of the event Victor Colantonio told The Times this year will see a “fantastic turnout” of Vineyard men and women. The MVSC has reached its cap for the event, at 20 participants, and the NAC will be competing with 18 registered anglers of its own.

Although Colantonio said he wishes folks could fish together in-person this year, he is happy that the tournament is still on, and that so many young anglers have registered to fish with the team.

“Nantucket would much rather do it in person, but from what I’ve heard, the Vineyard people are actually pretty comfortable with virtual fishing — they fish at hours that most people don’t, so they are happy with being able to go out at 2 am and not have to worry about someone who might just want to keep sleeping,” Colantonio said with a laugh.

According to Colantonio, Larry’s Tackle Shop, owned by Vineyard Island Cup competitor Peter Sliwkowski, has gone “above and beyond” this year to create an operational scorekeeping system where folks can email, text, or call in their catch, and they will be recorded online in real time. “We will essentially have a minute-by-minute tabulation of where individual teams are, and where the total team count is,” Colantonio said.

He told a story of a past event when the fishing was down to the wire, with only an hour to go, and the Vineyard team was leading by 20 or more pounds. “A blitz occurred on the beach over on Nantucket, and the Nantucket guys hauled in 45 pounds of fish, and our guys got nothing. We had amazing fishermen, and we couldn’t land a single fish in that last hour,” Colantonio said.

During another past Island Cup, Nantucket was hit by a violent storm on the last day of the tournament, and Island anglers were considering packing it up.

The fishermen were supposed to stop fishing at noon, but at around 9 am, a massive front came rolling, blasting Nantucket with 30-knot sustained winds and pelting rain that flattened the ocean.

They waited out the storm, and at around 11:30 am, the sun broke through the dark rain clouds, and the wind died down — Nantucket was leading the Vineyard by 2.5 pounds

Island angler Jim Cornwell hadn’t caught a single fish during the tournament, so he decided to take advantage of the 15 or 20 minutes he had left of fishing. “He made a couple of casts, and got a 2½-pound bluefish. He normally wouldn’t even weigh it in, but because he hadn’t caught a fish, he wanted to take that zero away from his name,” Colantonio said. “He weighed it on the digital scale, and it came in at around 2½ pounds. We ended up winning the trophy — it was incredible.”

For Colantonio, being able to fish through the pandemic helped him immensely, and although the Island Cup will be online again this year, he is excited to compete and trade stories virtually with his old friends.

Throughout the pandemic, all MVSA meetings were through Zoom, and there was little comradery to be found on the beaches while social distancing. During the difficult time, Colantonio said, he found solace and enjoyment in teaching his 8- and 9-year-old grandsons how to fish.

“I bought them fishing rods and reels, set them up, and took them out fishing. They experienced the absolutely thrilling experience of catching sea robins and bluefish. They are going to be the future of the Island Cup fishing tournament, and future fishermen of Martha’s Vineyard,” Colantonio said.

Lines go in at noon, and the tournament will end at noon on June 19. Last-minute tally sheets must be received by Larry’s Tackle Shop no later than 1 pm after the final horn blows.

“The contest is as much about building friendships as it is about winning bragging rights. After 17 years, the experience has its share of fish stories worthy of retelling,” Colantonio said. “We’ve had a great cast of characters over the years, all of whom worked hard to win the cup. Each year, something noteworthy happens that becomes part of our Island Cup history.”

Derby ramps up after a slow start 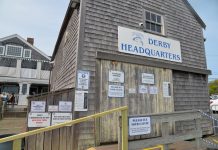