Who wouldn’t be envious of the eight students from the University of New Hampshire (UNH) and one lifelong learner from Martha’s Vineyard who sailed on the schooner Alabama from June 6 to 12 on a growth-filled, weeklong voyage of learning and comradeship?

The endeavor was the first for the Foundation for Underway Experiential Learning (FUEL), founded in 2017 by Ian Ridgeway and Casey Blum, LCSW. And coming out of the isolation of the pandemic, the sailors-in-training immediately bonded on their adventure.

“A few things I learned were more communication skills. Without technology, we had to find other things to do, which was awesome,” Mia, one of the students, wrote about her experience. “We created games, shared stories, jokes, played cards, and so much more. I love doing things like this, and I feel it created stronger relationships and connections.”

A majority of the educational programming that FUEL offers are voyages to about 150 fifth and sixth grade students across the Island’s schools. But says Blum about of working with the University of New Hampshire program, “We want to start working more with the young adult population, so this was our first chance to do that. They were really excited to learn, and eager to unplug from their phones. I think this year has been really hard for them, being on Zoom for all their coursework. Having the opportunity to do this face-to-face class and [have it] be such an experiential and immersive class, I think, was really rewarding for them.”

The course is part of the university’s outdoor leadership and management department. It focused on developing leadership skills, as well as those of judgment and risk management while working on the water. “The real focus,” Blum says, “was to get the students feeling like they had skills similar to other entry-level maritime positions.” Lessons included basic rope work and knots, how to splice lines, how to plan a voyage, and how to assess weather patterns. Each student also presented a 30-minute mini-lesson he or she had prepared ahead of time. Topics included whaling, Gloucester fishing schooners, rules of the road for navigation, and the marine ecosystem.

The daily routine was generally to rise at 7 am, with everyone going on deck to wash down the ship. Then it’s down below for bunk inspection. “It’s part of the risk management routine, making sure everyone’s things are stowed neatly in their bunks. Breakfast was about 8 am. We had a cook on board who made great, nutritious meals, and the students took turns on galley duty,” Blum explained. “They also were split into three different watch groups, taking turns and helping out, including learning the name of all the lines onboard the boat.”

After breakfast they would generally set sail — or if there wasn’t any wind, it would be time for a dip. Then they’d roll into a mini-lesson and, after that, sailing. “Throughout the day there are just countless teachable moments,” Blum said. “And the students participated in everything from helping to set the sails to stowing them at the end of the day.”

The evening lesson depended on what they encountered during the day. “Once,” Blum says, “we’d had fog and we were anchored in Tarpaulin Cove, so we spent that day talking about the risks of navigating during the fog, how to make decisions while voyaging. We tried to tie the lessons each day to what was happening on board the boat. The experience is very real.”

After dinner, the captain would read the sea poem, “Dauber,” which is over a hundred pages long, and all in rhyme, by John Masefield. A “dauber” is a painter, and the poem is about a painter who goes to sea on a ship that is sailing around Cape Horn, and how after being bullied, he really becomes part of the crew. Blum says, “They would read by paraffin lamplight down below, so it was a pretty authentic experience.”

Everyone was typically ready for bed by 9:30 or 10. “Once it gets dark, people get tired, and it’s hard to stay up,” reports Blum. But students took turns in shifts during the night standing anchor watch with the professional crew members.

But the takeaways from the experience were not just maritime. “While classroom learning works for about a third of people, learning by doing works for everyone,” Ridgeway says. “The amount of individual human development that happens in a week aboard these ships is astounding. Opportunities like these to unplug, connect with nature, and learn in a fun and challenging environment are critical for our future as humans.”

The experience had a far-reaching impact for another student, Haley: “This week I have learned about the balance of work and fun. I am continuously stressing about what I am to do for a career. This week helped me learn about the potential of working while doing something you love. I can use this in my everyday life, because it can help me with figuring out my future. It has helped me think about one step at a time, instead of a single career I have to do forever.”

Blum says, “Many young adults are really struggling with substance abuse, anxiety, and depression right now, but I think they are a really resilient demographic and eager to learn, and for connected, authentic experiences; and I feel honored that FUEL is an organization that can provide them.” 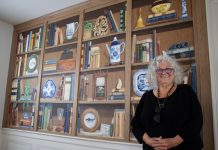 Linda Carnegie can paint anything