This Prairie Catch-Basin
By Zachary Wiesner

Our Mid-West, filled by run off from the Rockies and Appalachians,
Passed it down the rivers
To the lakes and the sea.

This prairie catch-basin of promise,
Fertile to simple, familiar dreams,
Draws human run off from everywhere.

Do they carve paths in the prairie by their passing,
As water leaves the tale of its passing in the rock?

Are these paths through the basin
All that will remain when this heartland is covered closed, and it’s time is over,

And our time is over,
And the human desire
For freedom and dignity
Peoples a different prairie?

Poets with a connection to Martha’s Vineyard are encouraged to submit poems to Poet’s Corner curator Laura Roosevelt at ldroosevelt@gmail.com. 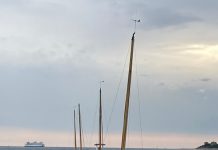