Walter Gordon Thompson, an entrepreneur and outdoorsman, died on June 19, 2021, surrounded by family at his home in Vineyard Haven. He was 83. 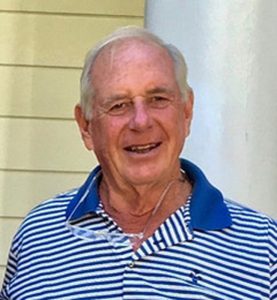 Hilly, as he was known to his friends and family, was born on May 23, 1938, the son of Lewis Steenrod Thompson Jr. and Loulie Gordon Thompson. His family lived in Washington, D.C., and in Albany, Ga., although he attended boarding schools in South Carolina and New Hampshire from the age of 7.

Hilly was a serial entrepreneur whose love of the outdoors was a central pillar of his life. He greeted every morning at his north shore home with a walk down the hedged path to the ocean and a ritual skinny-dip. An avid fisherman, he regularly combed the beach, trailed by at least one of his beloved dogs, on the lookout for striped bass and bluefish.

Hilly was a founder of Cambridge-based AOBiome Therapeutics, a life sciences company focused on treating inflammation and consumer products related to the health-related benefits of nitric oxide. Hilly stepped down from the board before a two-year struggle with cancer. After getting his master’s at Columbia University, Hilly worked for the International Basic Economy Corp., a company founded by former Vice President Nelson Rockefeller to develop agribusiness and housing in Latin America. During his time with IBEC, Hilly lived in Brazil and Chile. Later he was president of Separation Technologies, a company that processes fly ash produced by coal-burning power plants. In addition, he was an investor in commercial real estate.

While Hilly loved to fish, his greatest passion was quail hunting at his family farm in south Georgia. Gillionville Plantation has been in Hilly’s family since shortly after the Civil War, and he spent several weeks there each year, almost always a family affair including children and grandchildren. Gillionville also operated as a hunting club for more than 35 years, with a small but influential group of members and guests that included, over the years, U.S. presidents and corporate CEOs.

Before attending Exeter Academy in New Hampshire, Hilly attended Aiken Prep in Aiken, S.C., where he entered as a boarding student, beginning in first grade. Athletics were always an important part of Hilly’s life. He swam competitively during his high school years at Exeter, and played lacrosse for Washington & Lee University in Virginia. He was a member of a team of college lacrosse athletes representing the U.S. that toured Australia in 1959, and he served in the Marine Corps Reserves after completing USMC Officer Candidates School.

More recently, Hilly was a regular on the tennis courts of the Dedham Club near his home in Dover, and at the West Chop Club. Hilly continued to play tennis into his eighties. He spent one of his final days lying in the sun in a lawn chair as grandchildren and a half-dozen dogs ran around him playing. He sipped rum and enjoyed some chocolate cake as he looked out at the Vineyard Sound, enjoying the kind of weather he often referred to as a “bluebird day.”