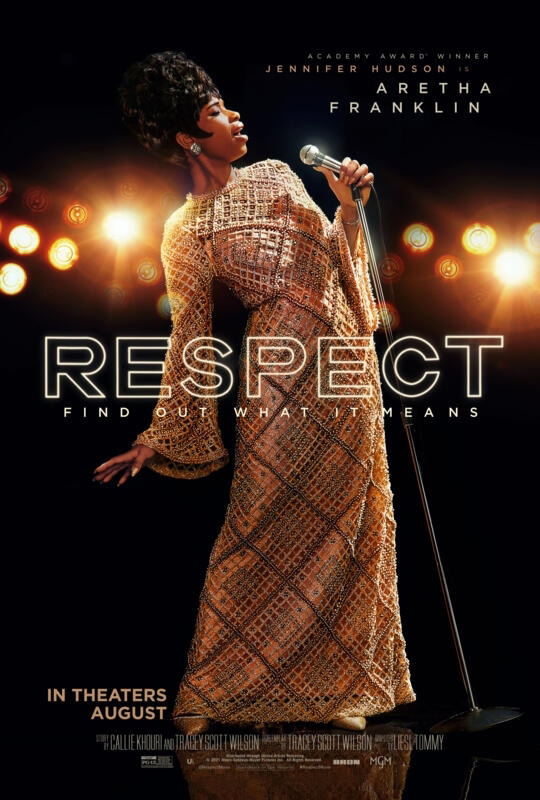 “Respect,” the Aretha Franklin musical bio that previewed on Friday, July 30, at the M.V. African American Film Festival, opens officially on Friday, August 13, at the M.V. Film Center. One of the most anticipated films of the year, it celebrates the late singer, who was dubbed the “Queen of Soul.” Franklin won 18 Grammy awards and was named the number one greatest singer of all time in Rolling Stone Magazine’s Top 100.

In a star-studded production, Jennifer Hudson plays Aretha, and Forest Whitaker plays her father, C.L. Franklin, pastor at the New Bethel Baptist Church in Detroit. Both Hudson, who was handpicked by Aretha before she died in 2018, and Whitaker have won Oscars, Hudson for “Dreamgirls” (2006) and Whitaker for “The Last King of Scotland” (also 2006). Hudson sings Aretha’s songs in the film. South African-American Liesl Tommy, the first woman of color to be nominated for a Tony Award for direction of a play, “Eclipsed” (2017), is director of the movie.

“Respect” begins with Aretha as a 10-year-old (played by Skye Dakota Turner) singing gospel in the choir at her father’s church. Her talent soon became evident and was fostered by her father, who became her manager. Her childhood was a difficult one, but the film shows her close relationship with her mother, separated from her father because of his infidelities, in frequent flashbacks. The film does not mention the fact that she had her first child at age 12, but in one scene hints that she was molested. Her activism and friendship with Martin Luther King Jr. are portrayed early on when she decided to attend a civil rights march, supported Angela Davis, and also sang award winning “Respect.” Mary Blige plays Dina Washington, an early supporter.

Eager to move from gospel to more popular soul music, Franklin encounters conflict with her father. In several scenes she records in Muscle Shoals, Alabama, with a white back-up band. It was the beginning of her transition to the “Queen of Soul,” and eventually to pop music.

At age 18, she met her first husband, Ted White, at a party, and she replaced her father with him as her manager. But her relationship with White was not an easy one. He had conflicts with the band and was abusive to Aretha until she left him. The flashbacks with her mother continued, and she was an inspiration to Aretha. Her children are shown being taken care of by her grandmother and her sister, Erma, but Aretha visits them frequently in the film. Her backup singers were her sisters Carolyn and Erma.

Her fame grew, and she is shown moving to California. Her difficulties also became evident, in particular with a drinking problem. Her father came into her life again, and he supported her. Against the advice of her manager, her next album was a religious one, which became famous. “Respect” ends with her singing in church, but leaves out many events of her long life up until her death.

A number of aspects of her later life are not shown in the film, such as her father being in a coma after he was shot in an attempted burglary; her tribute to Carole King by singing “You Make Me Feel Like a Natural Woman;” and her many Emmys. But Tommy chose to end the film with her religious commitment. It was an appropriate finish.

Information and tickets for “Respect” and other Film Center films are available at mvfilmsociety.com.