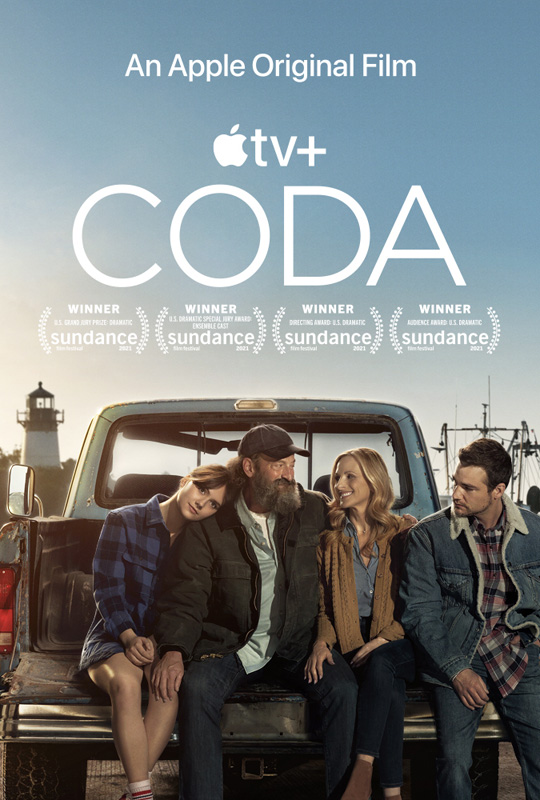 “CODA” plays at the Martha’s Vineyard Film Center on Friday, August 27, and continues Saturday, August 28, and Monday, August 30. The acronym stands for children of deaf adults, and it is a film particularly relevant for Vineyarders to see because of the longtime former deaf community in Chilmark. Internationally acclaimed, the film won four Sundance awards: for Audience, Directing, Grand Jury, and Dramatic Special Jury Award.

Emilia Jones plays Ruby Rossi, the one hearing member of a deaf family: her bossy mother Jackie (Oscar winner Marlee Matlin, who insisted on using deaf actors), her father Frank (Troy Kotsur) and her older and supportive brother Leo (Daniel Durant), all of whom are deaf. Frank and Leo fish from a Gloucester trawler with Ruby, who wakes up at 3 am to help her father and brother, then, exhausted, goes to school. There are many scenes describing the life of fishermen.

Ruby feels like an outsider at high school because the girls there make fun of her. At first running away out of fear, Ruby does eventually join the school chorus, led by Bernardo Villalobos (Eugenio Derbez). Bernardo sees the talent Ruby has as a singer, and directs her to sing a duet with another high schooler, Miles (Ferdia Walsh Peelo). In the meantime, Miles hears Ruby’s parents making love, and tells one of the girls at high school. Ruby is furious, and rejects Miles as a result. Eventually the two become infatuated, though, and there are many scenes of them swimming together at a nearby quarry.

As Ruby discovers a new calling, Bernardo offers to train her for an audition at Berklee College of Music. Ruby is caught between her new singing talent and the demands her family make on her, using her to act as an interpreter who can understand sign language. This is particularly true after the Coast Guard, not understanding they are deaf, calls for the boat to stop unsuccessfully. As a result, Frank loses his fishing license.

Jackie gets a red dress for Ruby to wear at her upcoming concert, and the family attends the concert, at which Ruby signs as she sings. In a particularly poignant scene, Frank asks his daughter to sing for him, and understands the song by putting his hands on her throat.

When Frank and Leo join an audience of fishermen, angry about the levies a fishing agency tries to impose, Ruby interprets for them, and they decide to form a co-op to sell their fish, getting rid of the middleman who offers them a lower price. The question is whether Ruby will continue to support her family or go to Berklee.

“CODA” employs talented deaf actors, and narrates its story effectively, portraying blue-collar life off the coast of New England. A Vineyard audience should enjoy this film.

For information and tickets for “CODA” and other Film Center films, see mvfilmsociety.com.