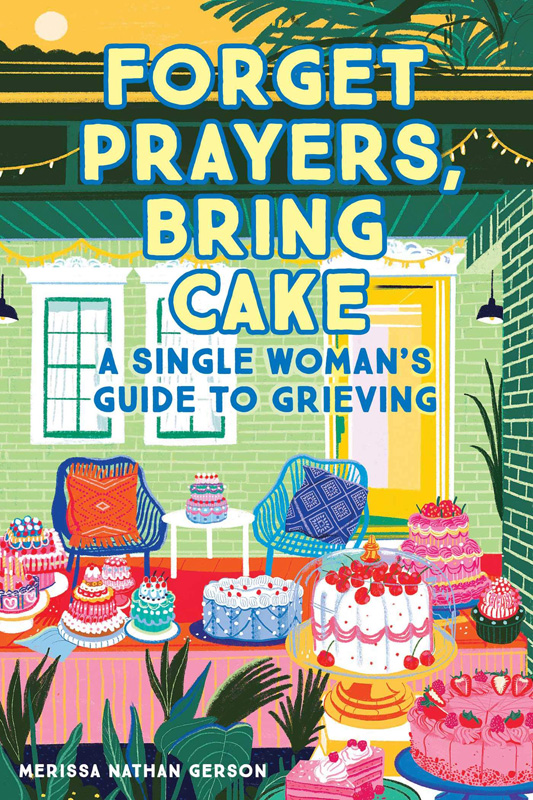 Last Friday, when Hurricane Ida was maliciously eyeing the Gulf Coast, I briefly spoke to Merissa Nathan Gerson about her new book, “Forget Prayers, Bring Cake: A Single Woman’s Guide to Grieving” (Mandala). Gerson, who is a professor at Tulane University in New Orleans, was figuring out her evacuation plans. As I write this on Sunday morning, Hurricane Ida has developed into a perilous Category 4 storm, with New Orleans in its projected path. The governor of Louisiana has described the storm as “one of the strongest hurricanes to hit Louisiana since at least the 1850s.”

Grieving. That’s what Gerson, who lost her father to a rare disease in December 2019, has written about.

Grieving. Collectively we’ve had to do so much of it since March 2020. Watching the morning news reports about the destruction Ida will surely inflict, even if the reconstructed levees hold strong, it’s clear that a torrent of new grief is on the way.

Grief for single women can show up differently from its appearance for married and coupled counterparts. Single women’s support systems will likely be more fluid, their feeling of aloneness more alone. “I found myself wanting someone to hold me. I wanted someone to listen to the pain. I wanted meals,” writes Gerson. She also realized, “I wasn’t going to wait for a prodigal life partner to rescue me from my grief.”

Although she wrote the book with single women in mind, her insights and advice will be useful to all. For those who worry we are grieving the wrong way. For those of us who feel we are over-grieving or under-grieving, or repressing our grief, or that we can’t turn it off. “Popular culture encourages burying hard feelings and relishing Botox and perpetual youth,” writes Gerson, who makes the case that popular culture be damned because, “We need to wail.”

Gerson is a lifelong Vineyard seasonal resident, and spent three winters on the Island beginning in 2016. She bought a house in New Orleans in May 2019, and relocated there on Sept. 5. Her “six-foot-four, husky, larger than life” father, Allan, helped move her in — during flash flood and tornado warnings for yet another storm.

“The last thing my father did in this life was help me set up a new home base. We were both a bit desperate for me to find my place in this world,” writes Gerson.

It took doctors some time to figure out what was happening to Allan Gerson, who was eventually diagnosed with Creutzfeldt-Jakob disease (CJD). Gerson writes, “Over the course of one single week, my brilliant poet, photographer, groundbreaking-international-lawyer father was no longer quick-minded. He could no longer stand up without falling over. He could only text with consonant letters.”

Gerson started writing the book while her father was dying. “I was aware that my coping mechanisms were different from my siblings, and meeting my needs looked different because I didn’t have another person looking after me,” she explained during our phone call. “The Island would have held me, and the people I know there would have, but I was alone in New Orleans, and I started noticing that I had developed skills that were unique to being on your own.” (She noted that living on the Island for three Vineyard winters helped her develop these skills.)

She started writing the book to share what she had learned, but doubts about her own grieving process continued to percolate. She worried that she was grieving the wrong way. “Was I doing everything wrong?” she wondered.

“Can I keep crying?

“Can I fall apart?

“Am I expected to resume my previous form?

“What about my bed? Can I still take to my bed?

“Can I keep asking for help when I need it?

“What is this shame thing that has suddenly returned?

“When is my sadness too much?

“When, Freud, does mourning turn into melancholia?”

It is in the pages of her book that Gerson shares her story and the intimacies of her own grief. Each chapter ends with a section filled with suggestions. These sections have titles like “Identifying Your Needs,” “Dating Standards: The New Frontier,” and “Stabilizing Your Nervous System in a Pinch.” This useful-tips format was inspired by the how-to book that’s considered the bible for pregnant women, “What to Expect When You’re Expecting.”

Grieving is a deeply personal and individual process, and Gerson’s book allows the reader permission to grieve their way. “People are going to tell you to ‘move on.’ Someone will definitely suggest therapy in a way that makes you want to punch them instead of the wall. Someone else will tell you to ‘let go,’ and another person might suggest that you’re ‘mourning too long,’” she writes. “Mourning is individual. Timing is personal. No one gets to decide but you.”