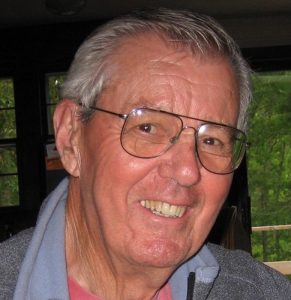 Born on May 11, 1931, to Thomas and Eva Welch in Hamden, Conn., he grew up learning the building trade from his father.

In 1952, he was drafted into the Army, and after basic training he was sent to Germany, where he put his construction skills to use as part of the 862nd Engineer Aviation Battalion, also known as SCARWAF (Special Category Army With Air Force). While in Germany, he earned the National Defense Service Medal.

After being discharged, he met and married his first wife, Barbara Corliss. They moved to the Vineyard and raised four children. Here they created retail businesses, and Frank began his construction business. Frank was well-known for his building skills, specializing in maintenance and repair. He could be seen over the years working on various buildings on the Vineyard: Mad Martha’s, Brickman’s, Rainy Day, and the harbormaster’s booth in Menemsha. He was particularly proud of the house he built with his second wife, Virginia, where they raised two daughters, and where he lived until his death.

As a motorcycle enthusiast, Frank rode well into his eighties, making annual sojourns with his friends to Daytona, Fla.; Lake George, N.Y.; and Fryburg, Pa. With his sister, Eva, as co-pilot, he also took many road trips across the country in his truck.

He was a part of various organizations, including being a member of the AA program, where he achieved 47 years of sobriety, and helped many people find and keep theirs. As a veteran, he was a proud member of the American Legion Post 257, where he participated in many events.

Graveside services will be private. A celebration of his life will take place on Sunday, Oct. 24, 2021, at the new Agricultural Hall Panhandle Road, West Tisbury, from 2 to 5 pm. All are welcome.