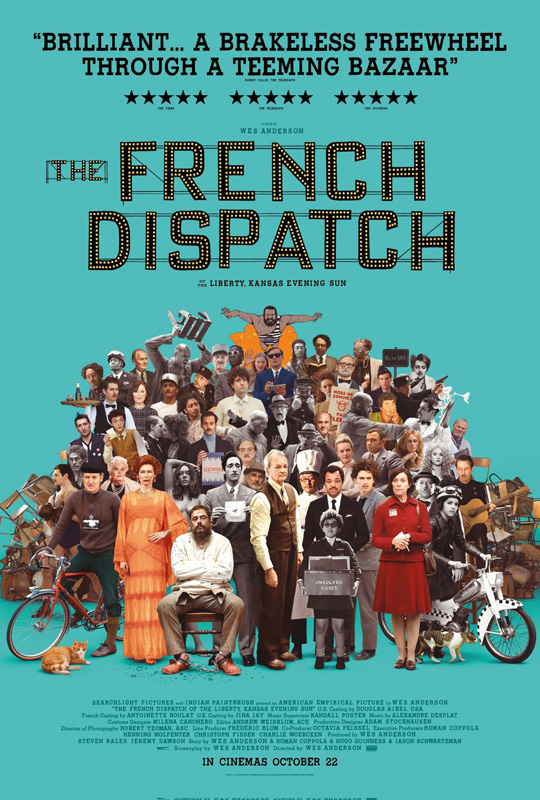 Coming to the MV Film Center on Friday, Oct. 29, is Wes Anderson’s magazine tribute, “The French Dispatch.” This comedy is a dizzying rollercoaster ride that features a bevy of well-known actors. Headlining them are Bill Murray as magazine founder and editor Arthur Howitzer Jr.; Frances McDormand as journalist Lucinda Krementz; and Timothée Chalamet as the radical Zeffirelli.

“The French Dispatch” is constructed as an imaginary magazine anthology, with a series of magazine articles. Anderson has called it “a love letter to journalists.” In an introduction whose voiceover viewers may recognize, “The French Dispatch” describes Arthur Howitzer Jr. as the founder and editor-in-chief of the magazine. Many would say that this magazine is a tribute to the New Yorker, which had its heyday in the mid-20th century, but it could be based as well on many other successful magazines of the era. The French Dispatch is published in the fictional French town of Ennui sur Blasé — pun intended — and inserted in the Liberty, Kans., Evening Star, a publication in the tiny Midwest town where Howitzer grew up.

Each story is presented as a magazine article with title and author, and the first is called “The Concrete Masterpiece.” Introduced by the bewigged character J.K.L. Berenson, it shows a more than slightly loony artist and murderer named Moses Rosenthaler painting a nude, Simone, who reappears dressed in a prison guard’s uniform and becomes his lover. Art collector Julien Cadazio shows up and tries to purchase the painting, but Rosenthaler refuses. Instead, he creates abstractions on the prison wall — hence the concrete masterpiece — and they cause a sensation, which Cadazio carries off in an interesting way.

In the second story, “Revisions to a Manifesto,” typewriting journalist Lucinda Krementz authors a two-part article on the 1968 student riots in Paris, led in this case by Zeffirelli, who becomes her lover. The third is called “The Private Dining Room of the Police Commissioner,” written by Roebuck Wright as a thinly disguised James Baldwin, and featuring Herbsaint Sazerac as a TV talk show host. And so it goes.

The film concludes with the final issue of The French Dispatch, which Howitzer had called for in his will. “The French Dispatch” is a challenging film, a minefield filled with literary allusions and obscure references. It’s a film that will benefit from watching a second, even a third, viewing. Then the viewer at least may be able to identify the well-known actors and the roles they play.

Information and tickets for “The French Dispatch” are available at mvfilmsociety.com.