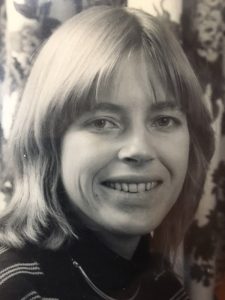 A daughter of Frank and Eleanor Gadd, Dede was born in Detroit, Mich., on July 11, 1950, and soon moved to Manchester, and then West Hartford, Conn. She graduated from Conard High School, the University of Hartford, and received her master’s in early chilhood education from Central Connecticut State University. She worked at the Discovery Center preschool in Berlin, Conn., and made a good friend, Marilyn Asal, while there.

Dede spent wonderful childhood summers in Chilmark, and came as much as she could throughout her life, and in the past 32 years with her significant other, John Bower. She was the love of his life, and they lived in Newington, Conn. When she and John were not on the Vineyard at the beach, on or in the water, birdwatching, or hiking the trails, they were doing the same elsewhere in the New England area.

She and John attended Church of Christ, Congregational, in Newington.

Dede will be remembered for her great heart and generosity, as well as for battling through her adult life with many health obstacles.

She leaves behind John Bower of Newington; her sisters Emily Gadd of Bozeman, Mont., and Chilmark, her sister Frannie Demers and husband Phil, nephews Daniel, John and his wife Dyan, great-nephew Clive, and great-niece Iris Demers, all of Chilmark.

An Abel’s Hill Cemetary service will be held in late spring or summer of 2022.