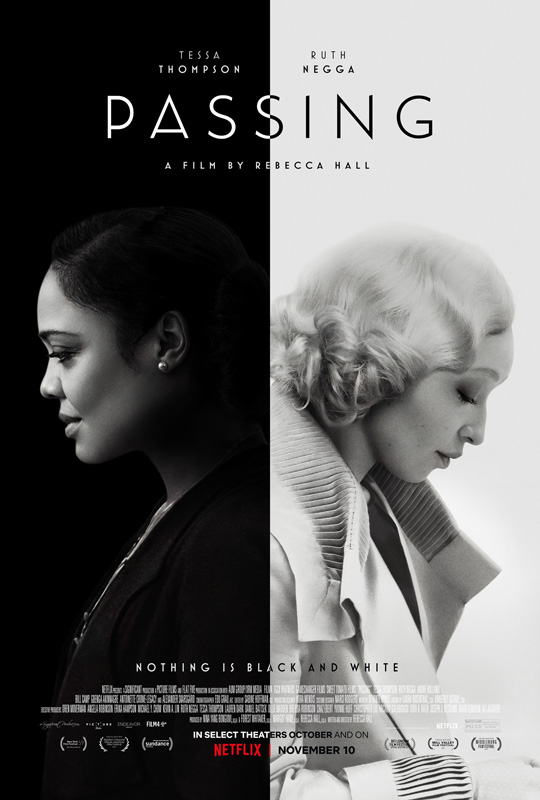 “Passing,” which explores what happens between two Black women with skin color light enough to be perceived as white, opens at the M.V. Film Center on Friday, Nov. 19. This disturbing but insightful film has been adapted from the 1929 Harlem Renaissance novella of the same name by Nella Larsen.

After a prelude in part to set the scene in New York’s segregated ’20s, “Passing” opens with Irene Redfield, a light-skinned Black woman played by Tessa Thompson, and nicknamed Rene, in a fancy restaurant at the Hotel Drayton, a white establishment. The film offers innuendoes about whether Rene is white, until a blonde, high school classmate named Clare Kendry (Ruth Negga) introduces herself and reminds her that she is actually Black. Their conversation, including the fact that Rene lives in Harlem, makes it even more evident.

When Rene visits Clare’s apartment, she meets Clare’s white, racist husband John (Alexander Skarsgaård) who is under the illusion that his wife is white. Rene asks him if he dislikes Negroes, and he answers, “I don’t dislike them. I hate them.” And he suggests that his wife does even more, something Clare laughs off, as if this were not the case. Probably because Clare is blonde, people often comment on her beauty in the film.

Rene, who plays it safe, a description used more than once, is resistant to Clare’s eagerness for a friendship. Probably because of her racist husband, Rene wants nothing to do with Clare. So Rene ignores the letter Clare sends her, but then Clare shows up at her door, asking why Rene didn’t answer her letter. She sees that Rene’s doctor husband, Brian (André Holland) is Black, as well as her two sons. Her maid Zu (Ashley Ware Jenkins) is also Black. Clare explains that she needs someone to talk to. In this way, “Passing” begins to portray the issue of race subtly. Learning Rene is head of the Negro Welfare League, Clare pressures her new friend into inviting her to attend a dance sponsored by the League.

The difference in the way the two women treat their passing becomes even clearer when Rene tells her husband Clare is coming and Brian responds, “That crazy woman?” In the meantime, Rene has a conversation with Hugh (Bill Camp), an author who is white, and that friendship begins to unfold.

At the same time, Brian’s friendship with free-spirited Clare begins to develop, making Rene suspicious and jealous. This second theme gives the film a greater complexity in terms of the two women. Brian discusses with his sons the lynching of a boy in Little Rock, which a repressed Rene insists he avoid talking about. It’s another illustration of the different ways the two women treat their ability to pass.

When Rene is out walking with a Black friend, they run into John, and the film uses this scene to illustrate how uncomfortable Rene feels in the presence of Clare’s husband. “What would you do if John found out?” Rene asks Clare. “I’d come up here to Harlem,” Clare says, expressing her longing to join a Black community.

When Clare attends a party Rene hosts, John shows up and confronts his wife, calling her a liar. Then the film is resolved in a distressing way. The viewer will greatly appreciate “Passing” for the successful way it reveals the complexity of race relations.

Information and tickets for “Passing” are available at mvfilmsociety.com.