Winifred E. Tate died at home on Oak Tree Lane, Vineyard Haven, on Monday, Nov. 8, 2021, with her daughter Kathy (Kate) at her side. She was 99, and ready to join her loved ones who predeceased her. 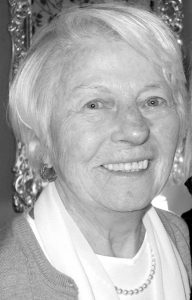 Born March 3, 1922, in Jersey City, N.J., she was the third child of John and Winifred Furey. She graduated from Holy Family Academy in 1940. During WWII, she worked for Western Union Telegraph Co. in New York City.

In 1951 she met Walter Phelps Tate Jr. on a blind date arranged by mutual friends. They married on Nov. 11, 1952, and moved to Brooklyn Heights, N.Y. In 1956, they relocated to Haddonfield, N.J., where their daughter, Kathryn, was born in February 1957. In 1964 they settled in Malvern, Pa. Winifred loved her life in their new home, and was devoted to her family.

She had a green thumb, enjoyed gardening, and loved fresh flowers in the house. She was a member of the Anthony Wayne Women’s Auxiliary branch of the Paoli Memorial Hospital from 1968 to 2010. She volunteered in the library at Villa Maria Academy from 1968, the school her daughter attended, through 1975, when Kathryn graduated.

She began coming to the Vineyard in 1977. After Walter died on June 26, 2010, she moved to the island to live with her daughter and son-in-law, Bob Gothard, at their home in Vineyard Haven. She loved sitting in the sun, walking, reading, and riding all over the Island, often in Bob’s powder blue ’64 Galaxie convertible.

She attended the Martha’s Vineyard Center for Living program. Thanks to their staff, who lovingly gave her many hours of fun and enjoyment.

She is survived by her daughter, Kathryn Tate Gothard, and husband Robert Gothard, along with his two children and their families. Six nephews also survive.

Her family wishes to thank their friends, who made her last decade on the Island so meaningful and joyous. Hospice MV provided remarkable care in her final days.

Donations in her memory can be made to the Martha’s Vineyard Center for Living, P.O. Box 1729, Vineyard Haven, MA 02568.