The holiday season is upon us, and people across the Island of the Jewish faith are gearing up for Hanukkah — an eight-night celebration with a nightly menorah lighting, special prayers, and yummy fried foods.

The Hebrew word Hanukkah means “dedication,” as it celebrates the rededication of the Second Holy Temple of Jerusalem.

Also known as the Festival of Lights, Hanukkah is a time when families and friends gather to give thanks, and some have special traditions they look forward to all year.

According to Herman, while Christmas is the same time each year, Judaism uses the lunar calendar, so Jewish holidays are at different times each year. This year, Hanukkah will begin on the evening of Sunday, Nov. 28, and end on the evening of Monday, Dec. 6.

Starting on the first day of Hanukkah, a candle is lit on the ceremonial candelabra, called a menorah. However, Herman said, the actual name of the candelabra that’s used during Hanukkah is the Hanukkiah. “The menorah is traditionally a six-armed candelabra, whereas the thing we light on Hanukkah is unique,” Herman explained.

Some families give presents each night of Hanukkah, while others prefer to donate to charity in lieu of giving and receiving gifts. Herman explained that families often have their own fun traditions they stick to each year. They don’t often go overboard on the decorating, Herman said, but decorations are an element of Hanukkah that has developed over time within the experience with what is called the Jewish Diaspora.

One important part of Hanukkah that has remained to this day is the sharing of great food.

The traditional Jewish potato latke is a delicious and crispy treat that is commonly shared throughout the eight-night celebration.

“We always enjoy eating crispy, not greasy, latkes,” Herman said. “Potato latkes, or if you are lucky, maybe even sweet potato.”

People traditionally use applesauce to dip their latkes in, or there may even be some tasty curry dipping sauce to try out.

Another common sight around the house during Hanukkah is kids playing with a dreidel — a spinning top with an interesting story attached to it. “Kids ante a penny, and then they spin the dreidel and see who is going to win based on what side it lands on,” Herman said.

According to Herman, a commonly taught origin legend of the dreidel is that the game was invented because people in ancient Greece were forbidden to study Torah, the Jewish holy text.

“People were forbidden to practice their religion. They would be hiding and studying Torah, and kids would play dreidel to distract the Greeks,” Herman said. “It was a big ruse.”

Additionally, she noted, the four sides of the dreidel bear four letters of the Hebrew alphabet that create an acronym for “A great miracle happened here.” This phrase represents when the Jews rebelled against those occupying their sacred Temple, and their oil for the menorah lasted eight nights despite the fact that there was only enough oil to burn for one night.

For each night of Hanukkah, another candle on the menorah is lit. There are special prayers said for each ceremonial lighting.

Although there aren’t generally specific religious services for Hanukkah, the Martha’s Vineyard Hebrew Center always does something fun to celebrate the holiday.

Last year, the Hebrew Center held a virtual service in place of a traditional celebration, due to COVID. They also held virtual candle lightings for each night of Hanukkah.

This year, according to fundraising, development, and event planning coordinator for the center Sally Cohn, the celebration will take place at the Tabernacle in Oak Bluffs on Dec. 3.

Starting at 5:30 pm, the celebration will run for approximately half an hour, and will include a lighting of the large Hebrew Center menorah, along with live music by Eric Johnson and Anthony Esposito. Rabbi Caryn Broitman will lead the group in singing and prayer. “Dress warm, and make sure to wear a mask,” Cohn said.

Preregistration will be required for the event. Call 508-693-0745, or visit the Hebrew Center website at mvhc.us, for more information, or to preregister. 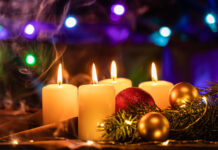 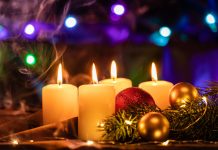 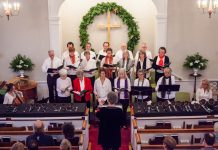