Richard Gleason, 84, of Vineyard Haven, beloved husband and father, passed away peacefully at home on Nov. 30, 2021. 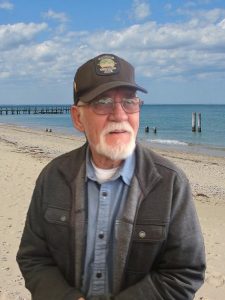 Richard was born in Dedham on Dec. 27, 1936, to Thomas and Gertrude (Lebline), the fifth of six children.

As a teenager, Richard volunteered for the cleanup efforts for the communities affected by Hurricane Carol in 1954. Then in 1955, he joined the Air Force and served his time in Korea, Germany, and Italy in the 310th Fighter Bomber Squadron. He was very proud of his time in the service, and loved attending the annual reunions at Sampson Air Force Base. After the service he had many jobs, from construction worker to garbage man, but ultimately had a long career with Montgomery/Kone Elevators and Escalators. In 1983 he survived a devastating accident on the job, leaving him with permanent injuries to his body, but certainly not his spirit or sense of humor. He often spoke of the “elevator business” and his co-workers throughout his life. In retirement, he served his community as a volunteer at the Cardinal Cushing Hospital (Good Samaritan) in Brockton. He then leaped into a new career as a seasonal manager for the Martha’s Vineyard Land Bank Commission, keeping the beaches and the piping plovers safe from too many tourists. After his second retirement, he served the children of the Island as a crossing guard for the Martha’s Vineyard schools, and helped at the Edgartown movie theater, on occasion, for the free popcorn.

Richard spent many years living with his family in Stoughton before retiring to his beloved Martha’s Vineyard. In his spare time, he loved reading history and adventure novels, and watching his beloved history programs on repeat. (Did he ever find out who won the war?) He built sets and acted with the Little Theater of Stoughton. He coached Pop Warner football. He collected woodworking tools, both old and new, working and not working, and loved creating things with his hands, especially practical items. He loved his pets. He loved meeting up for coffee, and sitting down to a giant bowl of vanilla ice cream.

The family would like to thank Hospice, which allowed Richard to remain at home near the end of his life.

Richard was predeceased by his siblings Patricia Sheehan, Geraldine McVaney, Thomas, Harold, and Joseph. He was husband of 60 years to Mary Jo; father to Michael, Kristine Hudzik and her husband Gregory and their sons, Colin and Joshua, Jonathan and his fiance Gillian O’Callaghan, Katherine Sardino and her husband Nicholas, and daughter-in-law Heather; and grandfather to Hannah, Sophia, Ella, Rosalie, and Gavin.

Services for the family will be held on Friday, Dec. 3, at 10:15 am at the Massachusetts National Cemetery in Bourne.

In lieu of flowers, donations can be made to M.V. Center For Living, online at mvcenter4living.org/donate, or by mail, P.O. Box 1729, Vineyard Haven, MA 02568; or to VNA Hospice of Cape Cod and the Islands, online at capecodhealth.org/ways-to-give.