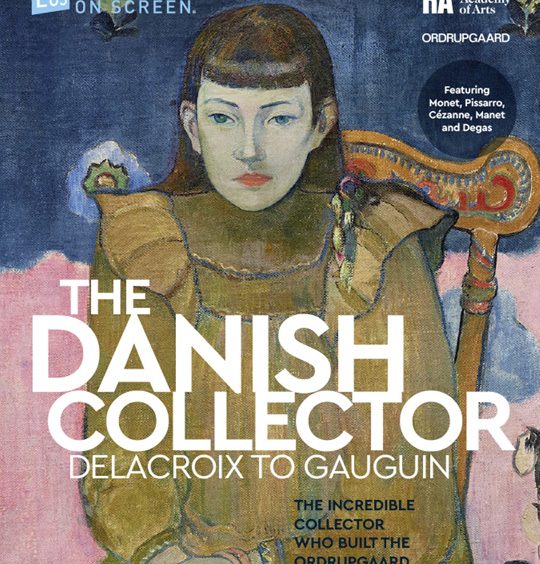 “The Danish Collector: Delacroix to Gauguin” comes to the M.V. Film Center on Friday, Dec. 17. Photographed and directed by David Bickerstaff, this fine documentary focuses on the work of Dutch collector Wilhelm Hansen and his wife Hennie.

Hansen, a wealthy insurance merchant, began to collect paintings, including 19th and early 20th century works, focusing on the Impressionists. After a banking collapse, he had to sell a large part of his collection.

He returned to collecting, however, including modern French painting and its classical predecessors. Beginning with Delacroix, Ingres, and Corot, he acquired works by Monet, Sisley, and Degas, continuing to post-Impressionists Cezanne and Gauguin.

After building a country estate, Ordrupgaard, Hansen turned it into a museum featuring these artists. The film concentrates on art collecting and dealing, with the beginnings of Impressionism in the “Exhibition on Screen” series. In contrast to the rest of the series, it focuses on Danish collectors like Hansen, whose Impressionist paintings went to the Danish state in the 1950s. He built his collection on the key figures that bridged the gap between the last of the classicist and Impressionist art. Of the 12 Gauguin works available, he acquired eight. The 19th century rise of galleries and art dealers included Paul Durand-Ruel, considered the most important art dealer of the 19th century. Among the first to buy from art dealers like Durand-Ruel were Russian collectors.

The film employs a variety of cinematic techniques, including slow pans and zooms, tilts, and edits, as well as reverses and overheads. Such devices allow the viewer to absorb the images and appreciate them without actually visiting the museums and galleries where they are on display.

“The Danish Collector” provides a larger cultural context, with photographic images of relevant cities and their surrounding areas. The Danish influence can be seen in the museum’s interiors. The advantage of the Hansen collection is that the works continue to be available for people to see.

When Hansen went to France, a new middle-class network of collectors with disposable incomes had emerged. The era of collectors and the rise of art dealers led to their acquisition of samples of every artist. When World War I began in 1914, most collectors lost the ability to buy art, although this was not the case for the Danish. Hansen began by buying one painting at a time. Forced to sell internationally, he sold his last painting in 1923.

Because of changes in the economy, prices had risen, but Hansen was still able to buy back much of his collection, including works by Delacroix, Manet, Monet, and Gauguin. He then switched to buying wholesale with other collectors, 200 to 300 works at a time, treating art collection as a business. Hansen was one of the few who bought works by women artists like Berthe Morisot and Mary Cassatt. “The Danish Collector” also addresses the role of women as collectors, often as adjuncts to their husbands.

Hansen died in 1934, having bequeathed his collection to the Danish state. The film is based on the London exhibition of Gauguin and the Impressionists, the Ordrupgaard collection in Copenhagen, the Royal Academy of Arts in London, and the National Galleries of Scotland in Edinburgh.

Information and tickets for “The Danish Collector” and other Film Center films are available at mvfilmsociety.com. For information on films playing at Edgartown Cinemas, visit entertainmentcinemas.com/locations/edgartown.