Jaime K. Javier was born and raised in the Philippines, Candelaria, in the province of Quezon. After earning his medical degree from the University of the Philippines, he came to the U.S. for a residency at St. Raphael Hospital in New Haven, Conn. It was there that he met Donna Marie Deren, a nurse. They married on Sept. 18, 1965. 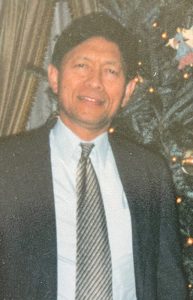 They moved to New Rochelle, N.Y., where he set up a primary care practice in internal medicine, and was an attending staff physician at New Rochelle Hospital Medical Center. After residing in New Rochelle for more than 30 years, Donna and Jimmy (as he was fondly called) moved to Somers, N.Y.. in 2005 until 2015, when they settled in their longtime home on Martha’s Vineyard.

Jaime is survived by his wife of 56 years, Donna; his sister, Susing Camus; his daughter, Monica Javier Bergman, and her husband Eric; his son, Brandon Deren Javier, and his wife Bree; his granddaughters Pryia, Melody, and Phoebe; and by a large extended family, fondly known as Uncle Jimmy, to whom he was a great-uncle and uncle to many nephews and nieces.

Jaime was an avid marathon runner, tennis, and table tennis player. He enjoyed sports of all kinds. He was humble, honest, and good-natured. His smile was always the biggest, his laughter contagious. His presence stays with us always.

Visitation will be held on Monday, Jan. 3, from 9 to 10:30 am at Chapman Funerals & Cremations, 56 Edgartown–Vineyard Haven Road, Oak Bluffs. A funeral Mass will be held at 11 am at St. Augustine’s Church, 56 Franklin St., Vineyard Haven. Burial will follow at the West Tisbury Cemetery, State Road, West Tisbury.