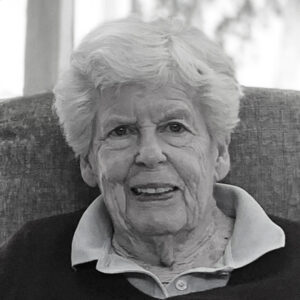 Sally was born in New Haven, Conn., to parents Mary Brooks and Alfred Whitney Griswold. Her father, a Yale University professor, was promoted in 1950 to become university president, where he served until his death in 1963. During this time, Sally met Yale student and future husband Dick. Sally attended Smith College during their courtship. Within a few months of meeting, the two were engaged. They married in 1953, and were deeply devoted to each other for the 67 years of their marriage. When Dick began his graduate studies at Harvard University, Sally accompanied him to Cambridge to complete her senior year at Wellesley College. She graduated in 1954 with a degree in art history from Smith College.

Sally’s family were lifelong summer residents of Martha’s Vineyard. After Sally and Dick wed and Dick was beginning his career at the Woods Hole Oceanographic Institution (WHOI), the Island seemed like an obvious destination for them to settle. In 1958 they built a house where they lived for several years, before moving to Chestnut Hill with their children, Sarah, Betsy and Peter.

In 1967, Sally began her 29-year career as a museum educator at the Museum of Fine Arts, Boston. First working as a volunteer gallery instructor, in 1978 she joined the staff as the coordinator of the Gallery Instructor Program in the Department of Education, where she was responsible for organizing, training, and supervising a group of approximately 70 volunteers. During her time at the MFA, Sally was involved in a number of innovative programs for children, and was instrumental in starting the museum’s partnership program with the Boston Public Schools. This program sent museum-trained volunteers into fifth-grade classrooms in the Boston Public Schools to help prepare the students for their annual museum visit. Upon her retirement from the coordinator position, Sally became an adjunct lecturer at the museum. Her areas of expertise were the Egyptian, Classical, American, Asiatic, Print, and French 19th Century Painting collections of the museum. In recognition of Sally’s leadership and devotion to museum education, she was honored in 1996 with the establishment of the Sarah G. Leahy Scholarship Fund. This endowment provided annual tuition for six young people to attend Saturday art classes at the museum.

Sally was outgoing, with a generous spirit and sense of humor. She enjoyed playing tennis, ocean swimming, and skiing with her family, and was an avid reader and watercolorist. Throughout their life together, Sally’s primary focus was her husband Dick. They were inseparable for almost seven decades. Their passion for the arts and education were instilled in their three children, and seven grandchildren as well. Sally was proud of each of them, supporting their education, and following their lives, accomplishments, and careers closely. One of Sally’s most cherished pastimes was reading aloud to her grandchildren from old favorites such as “Babar” and “Madeline,” and sharing the rhymes of A.A. Milne, Edward Lear, and Ogden Nash. Sally also loved their many trips to the MFA, where she ensured that each grandchild had a chance to visit a special painting or sculpture.

A celebration of Sally’s life will be planned for a later date.