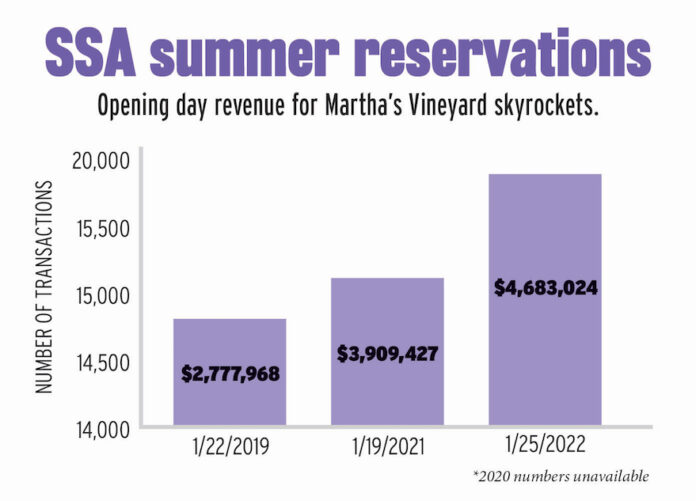 The Steamship Authority opened the online reservations for summer trips to and from Martha’s Vineyard Tuesday. And despite some turbulent openings in recent years, the ferry service reports it was mostly smooth sailing for customers booking their summer trips.

“Obviously we’re off to a very robust start for the summer,” Driscoll wrote. “The waiting room and website worked as expected, and any issues that were encountered were user-specific, not sitewide. At its peak, the waiting room had more than 14,000 users in the queue.”

Indeed, there were some compliments for the waiting room experience on the SSA’s Facebook page as reservations opened up. “The interactive waiting room was great. I knew where I stood in line at all times. The website managed the insanely high volume with no issues. Well done,” Michelle Elizabeth wrote.

But there were a fair amount of complaints, too. Some people reported lengthy stays in the waiting room. Stephanie Sutherland Anderson was frustrated to learn that the virtual waiting room opened at 12 am, a full five hours ahead of the reservation portal at 5 am. “I found this out after logging on at 4:54 and finding out I was 2,272 in line,” she wrote.

Driscoll, in a message to The Times Tuesday morning, referred to the complaints as “one-offs,” and said there were “no system issues.”