We came to the end of the yellow trail of the Middle Road Sanctuary, and were confronted with three options: We could turn back on the yellow trail and make our way to the connector to the Ocean View Farm Preserve, or we could go left or right on King’s Highway.

We, my terrier-mix pup Becham and I, had started from the trailhead off Middle Road. I was eager to hike the Sanctuary for the first time.

The hiking was good. The trails rose and fell and wound their way through rugged wooded terrain. I was beginning to feel the hike and was disappointed when the yellow came to an end.

I pondered a moment. The answer was before me. I could turn back to something I knew or we could take the King’s Highway.

I saw, with the aid of the TrailsMV app, that King’s Highway would take us to Meetinghouse Road, or further to the North-South Trail. Both of those options connected to the Tea Lane Farm Preserve. (I do not like accessing my phone on a hike, but the TrailsMV app is terrific. Any number of times when somewhat lost I have discovered nearby trails with the app.)

I took off my sweater and put it in my pack.

The Highway was a packed dirt road a little over one car wide, with trees on either side. I wondered about the history that gave it the name. There must be some story, as the Highway was anything but a highway.

After about a quarter-mile on the Highway, I frowned. I noticed I was hatless. Had I had my hat on when I started the hike? Yes, I remembered taking the hat off when I took off my sweater. Darn!

My wood-green Death Valley National Park hat has value — the memory of dusty hot gulches and unmapped canyons of the desert valley with my parents and my kids.

I turned us back at a run.

The hat was sitting in the middle of the road where I had set it down. No car had run over it. I placed the hat back on my head. Feeling whole again, I set back out.

The Highway does not betray the origins of its name. Nondescript roads branch off, as they would on any dirt road. The Highway goes from dirt lane to dirt driveway back to dirt lane.
We crossed Meetinghouse Road. The North-South Trail, which I had read incorrectly as a “road,” was not too much further ahead, according to TrailsMV.

We came to a rural neighborhood. A man with a leaf blower and ear protectors looked at us as if we were out of place, which we were. I consulted TrailsMV again. We had overshot.

I did not recall passing anything that could be the North-South Way. We tried what looked to be a driveway in the correct vicinity. It was a driveway, and ended with the stone wall of someone’s yard.

The map on TrailsMV showed us near but clearly off our desired route. We went back down to the King’s Highway. We retraced our steps further.

And then there — one of the wonderful surprises of the Vineyard: a hidden way into the woods that appeared out of nowhere. The North-South Trail — not a road at all — off of the King’s Highway.

I turned with some excitement.

The trail climbed a hill. A stand of thin trees was off to the side — my guess was new oaks, but I am not an arborist. I was very happy as we hiked. The King’s Highway had brought us to this little jewel. The way rose and fell and tilted with the lay of the land.

The trail was well-maintained. There were snarls of roots, but the way was clear of new growth. Who cared for this trail? Some magical trail tender? It was not a marked conservation property.

The North-South Trail was not long, and soon came to its end. I heard traffic. Some sort of trailhead looked to be ahead. Must empty out onto Middle Road, I thought. I was in for another surprise.

Instead of a path to the paved road, I found a little earthen clearing at the side of a brook with a small waterfall. The water was clear and flowed over a muddy bottom. The brook laughed ever so quietly.

We took our first break there, wrapped in the overgrowth of the clearing. Becham looked as though he wanted a drink of the freshwater, out of reach because of the steep bank. I took out my collapsible bowl and filled it with water I had brought. I gave him a piece of turkey jerky and had a Kind Bar for myself. I took a long drink of water.

The day’s wonders did not end there.

We walked along the brook a ways, and then along an old stone wall made of a variety of lichen-covered rock. We crossed Middle Road to the Tea Lane Farm property. Not ready to turn so soon, we passed by the farm and kept on the trail. We came to another brook and a magical wooded wetland area. We passed over the wetlands on a wood footbridge.

We came out onto a dirt road. A person jumped out at us. It turned out to be a sculpture of the upper half of a person on a tree. Another such person was farther into the woods.

We walked the nice, wide grass trail that bisected the open fields of Tea Lane Farm, then down Tea Lane Road itself and along Middle Road back to Meetinghouse Road. I found a trail there back to the Middle Road Sanctuary.

The trailhead was not far. We were soon back to the truck. I had an RX Bar, and gave Becham another piece of jerky.

The hike was under three hours. We had covered all sorts of ground — brooks, wetlands, stone walls, bridges, open fields, and wooded ways.

My mind kept coming back to the King’s Highway. 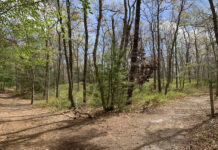 On My Way: A carpet of pine needles 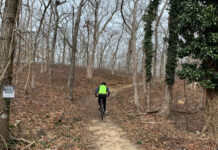 On My Way: Biking Pennywise Path