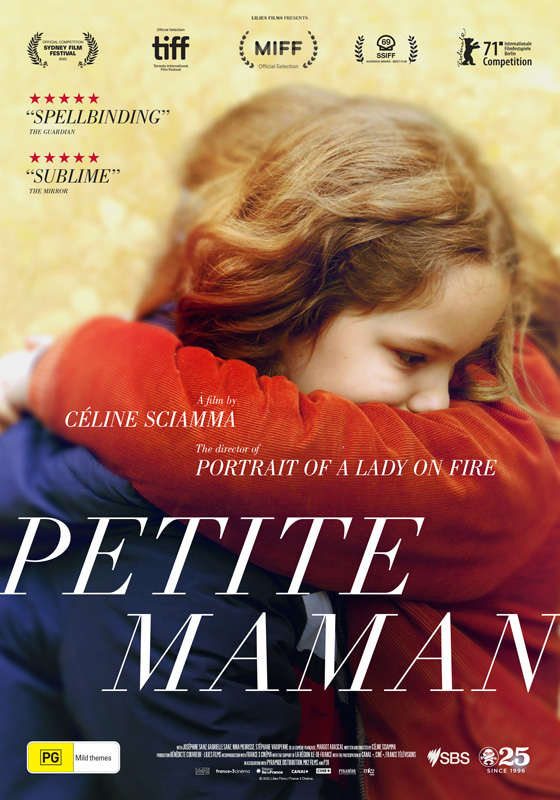 “Petite Maman,” the French film by Céline Sciamma, arrives at the M.V. Film Center on Friday, May 13. The superstitious vibes of that day are transmuted by this magical story. It’s part fairytale and part ghost story, as only film can persuade the viewer of their realism. Sciamma, an accomplished screenwriter and director, most recently won three Cannes awards, including the Palme d’Or, all for “Portrait of a Lady on Fire” (2019).

This exquisite story is told entirely from Nelly’s perspective, which explains some of the narrative gaps and parallels. It begins in a series of hospital rooms where 8-year-old Nelly, played by a remarkably talented Josephine Sanz, is saying goodbye. It turns out that one of them, unbeknownst to her, her beloved grandmother, has died.

The viewer next sees Nelly outside in the woods, picking up acorns and tossing them at the trees. One of them she whistles with. The first sign that this world may have magical elements comes when Nelly is in bed with her mother, and they look at the foot of the bed for an imaginary black panther, which neither she nor her mother sees. When Nelly wakes, getting herself a glass of water, she joins her mother on a sheet-covered sofa. She talks about the sadness she feels at not giving her grandmother a proper goodbye. Then morning comes, and her mother is gone.

Soon Nelly meets a little girl who looks exactly like her and whose name, like her mother’s, is Marion (played by Gabrielle Sanz, her identical twin sister). This Marion takes Nelly to a hut made of tree branches like the one her mother had as a child. The story progresses with the two 8-year-olds spending time together and playing. Occasionally the scene returns to Nelly’s house, where one time she watches her father shave off his beard. Then it’s time to go back home to her mother, but Nelly wants to make pancakes with Marion and spend the night with her at her house, which looks like Nelly’s.

A cake and song signify that it’s Marion’s birthday, and Nelly does spend the night at Marion’s house. The film continues with the girls taking a rubber raft to a lake and paddling to a pyramid that can only be magical.

In this way “Petite Maman” convinces the viewer of the significance of its title and its world. It’s a remarkable tale, and one the viewer should not miss.

Information and tickets for “Petite Maman” are available at mvfilmsociety,com. For information on films playing at Edgartown Cinemas, visit entertainmentcinemas.com/locations/edgartown/.