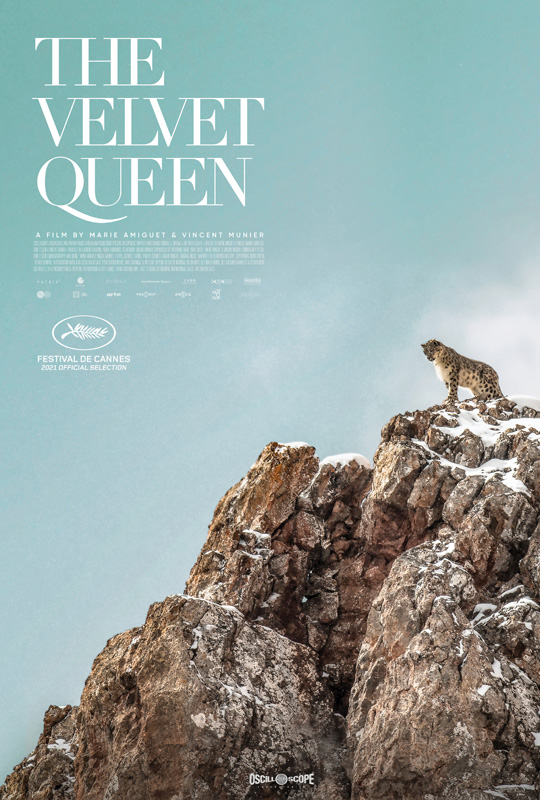 Viewers are in for a treat when “The Velvet Queen” opens at the M.V. Film Center on Friday, June 3. This ravishing documentary follows the search of Vincent Munier with Sylvain Tesson to find the elusive snow leopard that Munier has called the “velvet queen.”

The Tibetan peaks of 5,000-plus feet are where their search takes place. Prizewinning nature photographer Munier directed, in conjunction with Marie Amiquet, to film this wonderful exploration. Writer Tesson, who shared in the search, is also the author of a book about it: “The Art of Patience: Seeking the Snow Leopard.”

The two travel across the heights of Tibet in search of the elusive snow leopard. Along the way, they find and film a series of other animals of this remote part of the world that are in many ways equal in beauty to the snow leopard.

The film begins with a discussion between two Tibetans about the journey Munier and Tesson are going to take. Viewers will enjoy the breathtaking views of the peaks and valleys of this part of Tibet, and the film alternates them with the discussions and observations of the two men.

Tesson explains the goal of his colleague, which is to hunt for and photograph the wild animals the two find. One of their first discoveries is the discarded horns of bharals, also known as blue sheep. Heavily clothed in a reminder of the frigid climate, the two men are shown climbing the heights to happen on herds of bharals. To illustrate the difficulties of trekking at these heights, Tesson is caught quietly panting as he climbs.

Another inhabitant the two find and photograph is the Tibetan antelope, with its remarkably long horns. There are shots of these handsome animals squaring off and fighting. Another creature of the wilds that they observe is the Tibetan yak, which looks a little like an American buffalo, and although wild here, has also been domesticated by the Tibetans.

The musical score by Nick Cave and Warren Ellis matches in beauty the remarkable cinematography. A smaller but significant find is the hoof prints they uncover, which in past excursions Munier had missed. Not to be overlooked are the birds they find and photograph, including Tibetan hawks as well as Tibetan partridges. The behavior of Pallas’ cats, also known as manuls, is enjoyable to watch, with their rotund bodies and round faces as they capture a Himalayan marmot, also known as the Tibetan snow pig. Another find is the Tibetan sand fox.

Occasionally Munier and Tesson take refuge from the severe climate in a pup tent or a stone hut and enjoy some food and drink. They are happy to entertain some Tibetan children, and Tesson gives them a drawing he’s made of them. One of the more exciting observations Munier and Tesson make is of the Tibetan blue bear with her two cubs. When the animals approach the two, it’s an example of the risks involved in such explorations. The two set up a video camera, which catches close-ups of various animals.

Not to be forgotten are the shots included of the terrain Munier and Tesson traversed in their search for the snow leopard. They make magnificent examples of the world of animals found in the heights of Tibet.

Information and tickets for “The Velvet Queen” are available at mvfilmsociety.com. For more information about films playing at Edgartown Cinemas, visit entertainmentcinemas.com.